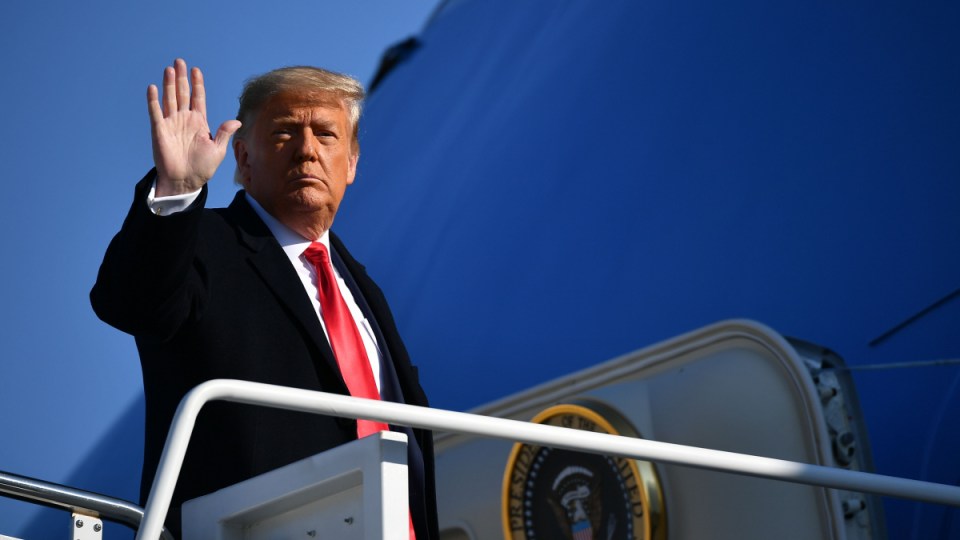 US President-elect Joe Biden has swiftly dismissed a move by Donald Trump to wind back pandemic entry bans for most non-US citizens who arrive in the country from Brazil and much of Europe.

The move, which was announced just hours before Mr Trump is replaced by Mr Biden at midday on Wednesday (Washington time), was to take effect from January 26.

Reuters first reported in November that the Trump administration had been considering lifting the restrictions, which were imposed early in 2020 in response to the COVID-19 pandemic, after winning support from coronavirus task force members and public health officials.

Under Mr Trump’s proclamation, the restrictions would have ended on the same day that new COVID-19 test requirements take effect for all international visitors.

However, Mr Biden’s press secretary, Jen Psaki, responded via Twitter within hours of the announcement on Tuesday (Australian time) to say the new administration would not lift the bans.

“With the pandemic worsening, and more contagious variants emerging around the world, this is not the time to be lifting restrictions on international travel,” she said.

“On the advice of our medical team, the administration does not intend to lift these restrictions on 1/26. In fact, we plan to strengthen public health measures around international travel in order to further mitigate the spread of COVID-19.”

The restrictions have barred nearly all non-Americans from arriving in the country if they have been in Brazil, Britain, Ireland and the 26 countries of the Schengen area in Europe that allow travel across open borders in the past fortnight.

The US restrictions barring most visitors from Europe have been in place since mid-March. The Brazilian entry ban was imposed in May.

The Trump administration imposed the bans to try to contain the coronavirus pandemic.

But coronavirus deaths are surging again in more than 30 American states as a winter spike pushes the overall toll from the pandemic toward 400,000 amid warnings that the new, highly contagious British variant is taking hold.

The Centres for Disease Control and Protection has warned that it will probably become the dominant version in the country by March.

The CDC said the variant is about 50 per cent more contagious than the virus that is causing the bulk of cases in the US.

There is also concern about other virulent strains of the virus from Brazil and South Africa.

Last week, the head of the CDC signed an order requiring nearly all air travellers to present a negative coronavirus test or proof of recovery from COVID-19 to enter the US from January 26.

Airlines had hoped the new testing requirements would clear the way for the administration to lift restrictions that had reduced travel from some European countries by 95 per cent or more.

They pressed senior White House officials about the issue in recent days.

Reuters previously reported the White House was not considering lifting entry bans on most non-US citizens who have recently been in China or Iran.

Pardon me? Not on Trump’s agenda

Elsewhere, Mr Trump is apparently not considering issuing a pardon for himself as he prepares an expansive list of more than 100 pardons and commutations for release in his final hours in the Oval Office.

White House advisers have said Mr Trump has privately debated with advisers whether to take the extraordinary step of issuing a pardon for himself but some administration officials have cautioned him against a self-pardon because it would make him look guilty.

One source said Mr Trump did not plan to pardon himself and also did not plan to issue preemptive pardons for his family members, another subject he has discussed privately with advisers.

Mr Trump, who has already issued two waves of pardons in the past month, met advisers on Sunday to finalise a list of more than 100 pardons and commutations, the source said.

CNN reported that Dr Salomon Melgen, a prominent eye doctor from Palm Beach who is in prison after being convicted on dozens of counts of health care fraud, is expected to be on the clemency list.

The source said the clemencies were expected to be issued on Mr Trump’s last full day in office on Tuesday.