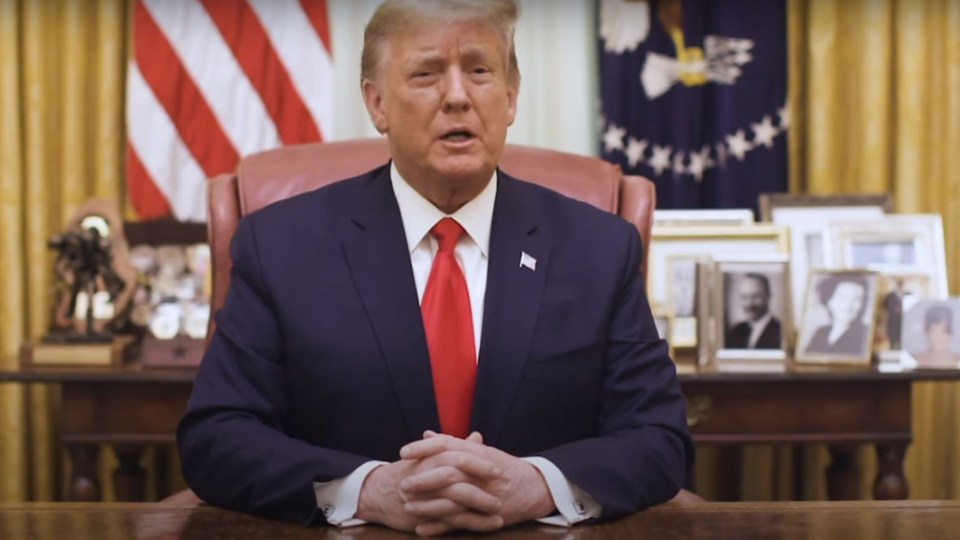 Donald Trump has released a video condemning last week's violence at the US Capitol. Photo: Twitter

US President Donald Trump has released a video on Twitter in which he says those who engaged in last week’s violent occupation of the Capitol will be “brought to justice”.

But Mr Trump ignored the House of Representative’s historic vote to impeach him for a second time that came just minutes earlier.

His video was released, via the official White House account, as House Speaker Nancy Pelosi was signing the article of impeachment against him that her chamber had just passed.

Instead, Mr Trump focused his remarks on the violence at the Capitol on January 6, which ultimately led the House to impeach him for incitement of insurrection.

“The incursion of the US Capitol struck at the very heart of our republic. It angered and appalled millions of Americans across the political spectrum,” he said.

“I want to be very clear, I unequivocally condemn the violence that we saw last week. Violence and vandalism have absolutely no place in our country and no place in our movement.”

Mr Trump also said he had directed federal agencies “to use all necessary resources to maintain order in Washington, DC” for the next week.

The article of impeachment will go to the Senate for a trial, although that is unlikely to be complete before Joe Biden is sworn in as the US’s next president on January 20.

Mr Trump is the first US president to be impeached twice.

The unprecedented milestone on Wednesday (US time) came after 10 of his fellow Republicans joined Democrats in the House of Representatives to charge him with inciting an insurrection in last week’s violent rampage in the Capitol.

Wednesday’s final vote in the Democratic-controlled House was 232-197.

However, the Senate’s Republican majority leader, Mitch McConnell, has rejected Democratic calls for a quick impeachment trial, saying there was no way to conclude it before Mr Trump left office. But even if he has left the White House, a Senate conviction of Mr Trump could lead to a vote on banning him from running for office anywhere in the US again.

The House passed a single article of impeachment – a formal charge – accusing Mr Trump of “incitement of insurrection”, focused on an incendiary speech he delivered to thousands of supporters shortly before the pro-Trump mob rampaged through the Capitol. The mob disrupted the formal certification of Mr Biden’s victory in November’s presidential election, sent lawmakers into hiding and left five people dead, including a police officer.

During his speech on January 6, Mr Trump repeated false claims that the election was fraudulent and exhorted supporters to march on the Capitol.

But in the new video statement, he took no responsibility for his remarks to supporters and failed to mention the impeachment vote at all. He did condemn the Capitol violence.

Just hours earlier, with thousands of rifle-carrying National Guard troops inside and outside the Capitol, an emotional debate unfolded in the same House chamber where lawmakers had crouched under chairs and donned gas masks on January 6 as rioters clashed with police officers outside the doors.

“The president of the United States incited this insurrection, this armed rebellion against our common country,” Ms Pelosi, a Democrat, said.

“He must go. He is a clear and present danger to the nation that we all love.”

No US president has been removed through impeachment. Three – Mr Trump in 2019, Bill Clinton in 1998 and Andrew Johnson in 1868 – were impeached by the House but acquitted by the Senate.

Senate Democratic leader Chuck Schumer, who will become majority leader later in January, said no matter the timing, “there will be an impeachment trial in the US Senate … and if the President is convicted, there will be a vote on barring him from running again”.

The House impeached Mr Trump after he ignored calls for his resignation and Vice-President Mike Pence rebuffed Democratic demands to invoke a constitutional provision to remove the president.

It previously voted to impeach Mr Trump in December 2019 on charges of abuse of power and obstruction of Congress stemming from his request that Ukraine investigate Mr Biden and his son Hunter. In February 2020, the Senate voted to keep Mr Trump in office.

The FBI has warned of armed protests planned for Washington and all 50 US state capitals before Mr Biden’s inauguration.