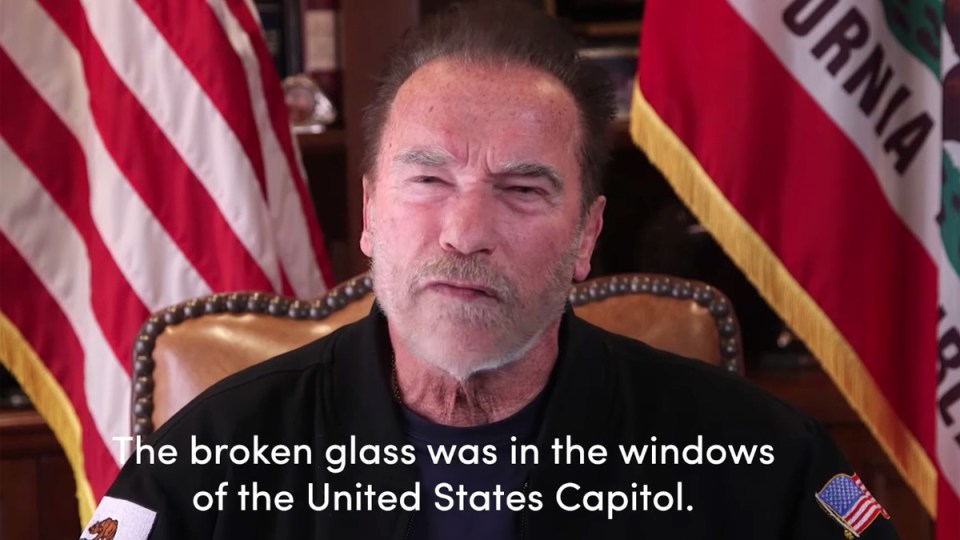 Arnold Schwarzenegger has denounced last week’s attack on the US Capitol, calling Donald Trump the “worst president ever”.

The actor and former governor of California compared last Wednesday’s events to Kristallnacht, or the Night of Broken Glass, the 1938 event that marked the rise of Nazi Germany.

“I grew up in Austria. I’m very aware of Kristallnacht, or the Night of Broken Glass,” Schwarzenegger said in a seven-minute video posted to Twitter on Sunday (US time).

“It was a night of rampage against the Jews carried out in 1938 by the Nazi equivalent of the Proud Boys.

“But the mob did not just shatter the windows of the Capitol. They shattered the ideas we took for granted.”

Schwarzenegger, who – like Mr Trump – is a Republican, said the scenes from the Capitol saddened him: “That’s not our America. That’s not my America.”

Schwarzenegger then shared a personal story from his childhood in Austria, remembering the aftermath of World War II and the effect it had on his family.

“I’ve never shared this so publicly because it is a painful memory. But my father would come home drunk once or twice a week and he would scream and hit us and scare my mother,” Schwarzenegger said.

“I didn’t hold him totally responsible because our neighbour was doing the same thing to his family, and so was the next neighbour over.”

Schwarzenegger said his experience growing up in Europe had shown him “firsthand how things can spin out of control”.

He then denounced Mr Trump, saying that the outgoing President “sought a coup by misleading people with lies”.

“My father and our neighbours were misled also with lies, and I know where such lies lead,” Schwarzenegger said.

“President Trump is a failed leader. He will go down in history as the worst president ever. The good thing is he will soon be as irrelevant as an old tweet.”

Schwarzenegger ended the video by wishing President-elect Joe Biden well and encouraging all Americans to stand behind him as he made the transition to president.

Earlier he had offered his trademark parting message to Mr Trump, telling Germany’s Bild am Sonntag newspaper: “You are terminated, Mr President”.