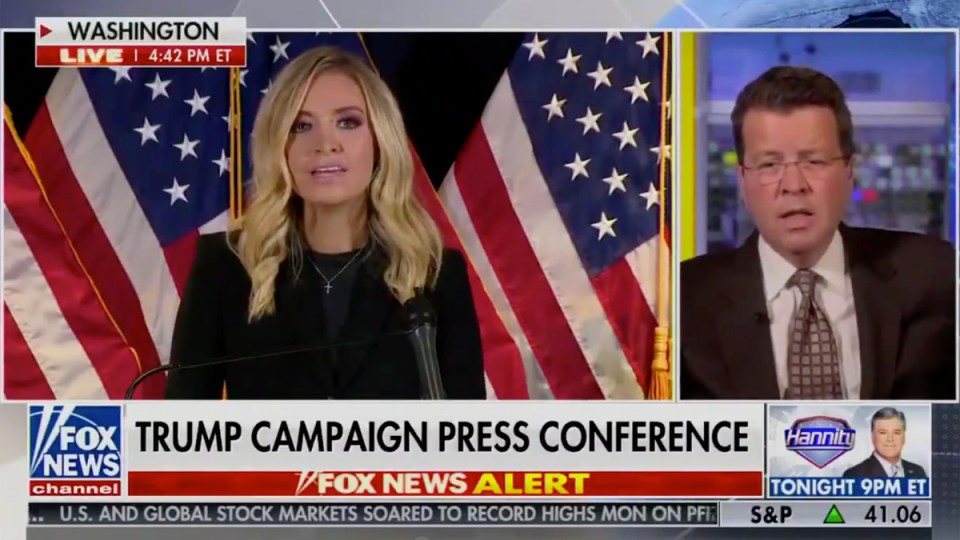 Fox News has joined several broadcasters – including Australia’s ABC – in cutting away from a Trump campaign press conference outlining allegations of so-called election fraud in the US presidential election.

White House press secretary Kayleigh McEnany stepped up on Tuesday (Australian time) to repeat claims of fraud and dodgy voting practices, including that Democrats had tried to bar observers from counting rooms.

With that, Fox host Neil Cavuto cut in, saying the election was far from over

“Woah, woah, woah, I just think we have to be very clear … Unless she has more details to back that up, I can’t in good countenance continue showing you this,” he said.

“I want to make sure that maybe they do have something to back that up but that’s an explosive charge to make, that the other side is effectively rigging and cheating.”

Back in Australia, the ABC also cut the feed hastily. News Breakfast host Lisa Millar said: “If they have any evidence, we’ll let you know about it. But not at this stage.”

Other broadcasters, including CNN, reportedly did not show Tuesday’s briefing at all.

It came after President Donald Trump fired off another burst of furious tweets, some of which have been flagged by Twitter.

Mr Trump still has not acknowledged his defeat in last week’s election.

Instead, he has launched an array of lawsuits claiming unfounded election fraud, despite state officials across the country saying they are unaware of any significant irregularities.

“Mark Esper has been terminated. I would like to thank him for his service,” he wrote.

Fox News has been a long-time supporter of Mr Trump. But the network fell foul of the President last week, when it was the first to call the key state of Arizona for his Democrat rival Joe Biden.

“I can confirm that Jared Kushner called Rupert Murdoch to complain about the Arizona call, which seemed crucial at the time,” Fox media correspondent Howard Kurtz told his audience on Sunday.