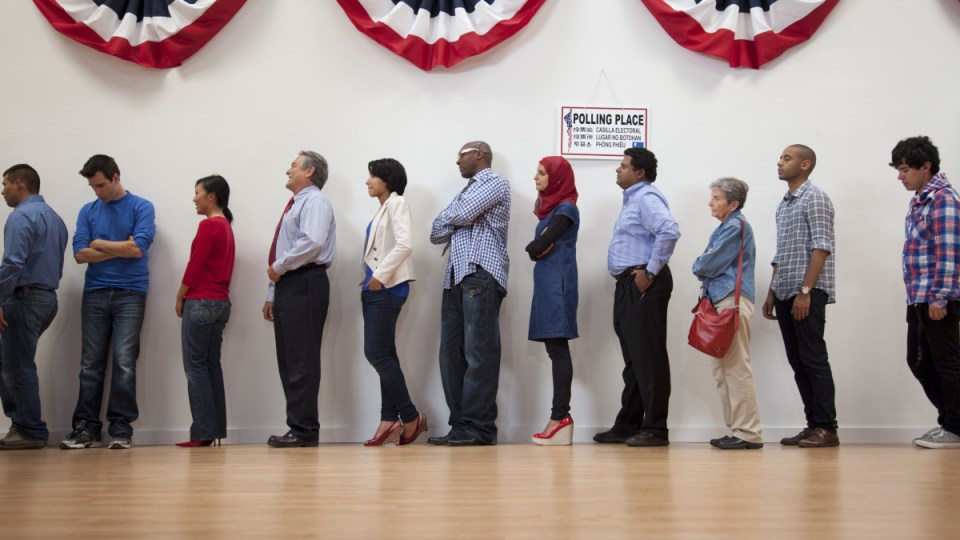 Early voting is under way in the United States, but major roadblocks prevent millions from having their say. Photo: Getty

Nearly 60 million Americans have already voted in the US federal election with one week left to go – a pace that could result in the highest voter turnout rate since 1908.

But five major voting barriers means millions of potential voters will miss out.

And although the polls point to a Joe Biden victory, Donald Trump’s shock win in 2016 has shown that anything can happen.

A small number of votes could be the difference between a second term with Mr Trump and a new direction with Mr Biden.

But not everyone’s voice will be heard.

In most US states, citizens must present ID at polling stations before they can vote.

This law was ostensibly created to prevent voter fraud, where a person cheats the system by casting votes on behalf of other people.

But while this measure might sound reasonable, the reality is at least 21 million Americans don’t have any form of identification deemed acceptable at polling booths.

As a result, many Americans who may have trouble obtaining the correct ID – such as low-income voters, people of colour, young people and those with disabilities – miss out.

In Texas, citizens can use their gun licences to vote – but people with student IDs will be turned away.

Unlike Australia, where voting is compulsory, Americans don’t have to vote if they don’t want to.

But if they choose to vote, they must register with a political party first.

If they turn up on the day without registering, their vote won’t be counted.

And in America, where nearly one in four eligible voters are not signed up, the rule can have devastating consequences for democracy.

In 2008, about three million citizens were barred from voting due to registration errors, and in 2012, millions experienced registration issues at the polls.

3. Attacks on voting by mail

To stay safe during the coronavirus pandemic, many Americans have been mailing in their ballots instead of turning up at polling booths.

But this year, the United States Postal Service has suffered major funding cuts under Postmaster General Louis DeJoy – a top Trump donor – making it harder for posties to deliver, receive and sort mail.

In some cases, sorting machines for mail have been deactivated at post offices and mail drop-off boxes have been deliberately removed from street corners before the election.

Adding to the confusion is a Republican-led misinformation campaign on social media that claims mail-in ballots will enable voter fraud and favour the Democrats.

To keep voter rolls up to date, election officials regularly review them and remove the names of people who are believed to be dead, to have moved city, or to be ineligible to vote for any reason, such as serving jail time.

But sometimes they get it wrong and accidentally remove the names of people who are alive and wish to cast their ballot.

One example of this was the 2018 state election in Georgia, when officials removed 107,000 eligible voters from voting records in 2017 simply because they didn’t show up to previous elections.

In 2016, tens of thousands of registered voters in New York were shocked to discover they had been removed from the rolls before the presidential primary election.

But that time, it was no accident.

It turned out election officials had illegally removed an estimated 200,000 eligible voters, resulting in a lawsuit in which the state’s Board of Elections admitted wrongdoing.

In 43 US states, citizens can choose to vote early by lining up at polling booths and casting their vote before election day on November 3.

It’s a handy option for people who can’t get off work on election day, which is not a public holiday (another barrier for working Americans).

But many voters have faced enormous lines or polling sites that are either closed or severely short-staffed.

Across the nation, voters are waiting several hours – some in icy autumn temperatures – to cast their ballots.

In one spot in Georgia, the wait lasted nearly a whole day.

This is a picture of voter suppression. Why do Americans have to wait in lines this long? This is the line in Suwannee Georgia today to vote. pic.twitter.com/rHl4Gr5kEi

US election: The five barriers blocking Americans from voting