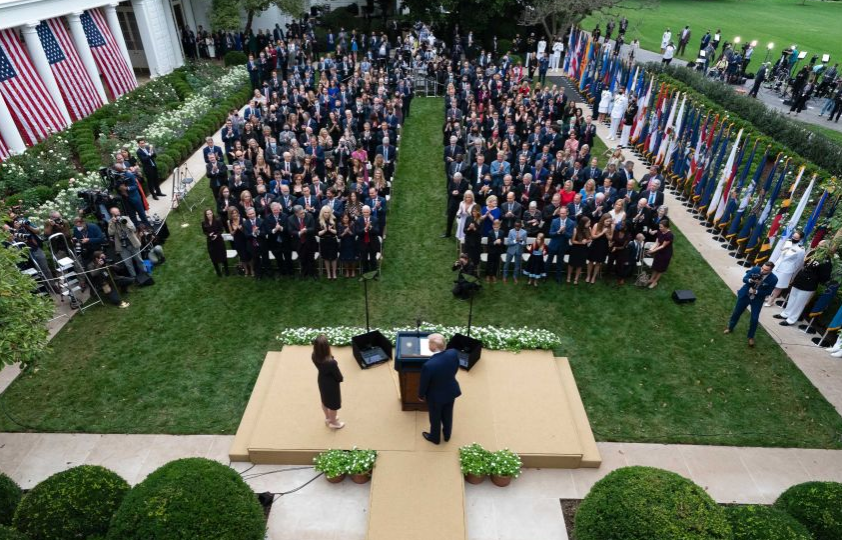 Amid concern for Donald Trump’s health, attention has turned to when and where the President contracted coronavirus and whether the White House has been fully transparent.

A look at Trump’s schedule over the past week shows multiple opportunities for infection and spread.

More than 150 people gathered at the White House Rose Garden for Trump’s introduction of Judge Amy Coney Barrett as his nominee for the Supreme Court. The event was highly social, but not distanced.

In the days that followed, a succession of attendees reported they had contracted COVID-19, among them Senators Mike Lee and Thom Tillis, former counsellor to the President, Kellyanne Conway and former New Jersey Governor Chris Christie.

The President then headed to Pennsylvania for a rally, followed by a golf outing on Sunday, a reception with families who lost children while serving in the military, and a press conference.

Trump and members of his team headed to Cleveland and the raucous presidential debate with Democrat Joe Biden. Adviser Hope Hicks was among them.

Organisers had required everyone in the hall to be tested in advance and found negative. There were also guidelines on social distancing, hand-sanitising, temperature checks

But most in Trump’s contingent – his adult children, senior staff and other VIPs – stripped off their masks, violating the rules.

“I don’t wear a mask like him,” Trump said of Biden mockingly in the debate.

“Every time you see him, he’s got a mask. He could be speaking 200 feet away … and he shows up with the biggest mask I’ve ever seen.”

Trump’s campaign manager, Bill Stepien, who attended the debate and helped him prepare with Christie, has tested positive for COVID-19.

Hicks had her daily coronavirus test in the morning, along with the others to be travelling with Trump for the day. Her results were negative. She joined others on board a flight to Minnesota for a fund-raiser followed by an outdoor rally in Duluth.

On the ground in Minnesota, Hicks reported feeling unwell.

Trump’s speech at the Duluth rally, where few wore masks, was notably shorter than usual, 45 minutes instead of the usual one to two hours.

Hicks kept apart from others on the plane returning to Washington and did not take the crowded Marine One helicopter back to the White House .

On Thursday morning, Hicks got another test. This time it was positive.

Despite Hope Hicks’ diagnosis, Trump went ahead with a fundraiser at his golf club in New Jersey. Others who’d also been around Hicks were

not immediately told about her positive test.

White House officials said they began learning of Hicks’ positive test after Trump boarded Marine One to start his journey to New Jersey.

Attendees have said staff at the event were masked but the guests weren’t.

Hours after the fund-raiser, Trump publicly confirmed Hicks had tested positive and told Fox News he and wife Melania had been tested and would quarantine if necessary.

At 12:54 am, Trump tweeted: “Tonight, FLOTUS and I tested positive for COVID-19. We will begin our quarantine and recovery process immediately. We will get through this TOGETHER!”

Hours after that, supporters who’d been to recent events received emails from the Trump campaign team urging them to contact their doctor if they developed symptoms.

Before the day was out, Trump was admitted to a military hospital in what White House officials initially said was merely a precaution. There have been contradictory signals since, with doctors saying Trump was doing every well, but his chief of staff, Mark Meadows, saying Trump went though a “very concerning” period.

Despite the failure to keep the President protected from the virus, White House officials have defended their current protocols as well thought out.

And masks still won’t be required on the White House grounds for all West Wing employees. “Wearing a mask,” said one official, “is a personal choice.

Where Trump may have caught COVID-19 – and spread it