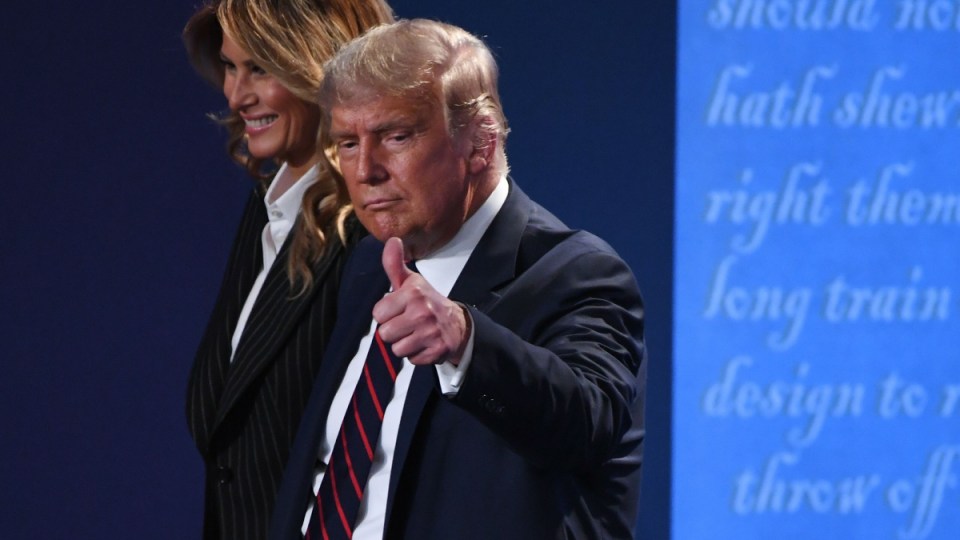 US President Donald Trump and his wife Melania have tested positive for the coronavirus.

The President confirmed the infection in a late-night tweet on Thursday (Washington time).

“[Melania] and I tested positive for COVID-19. We will begin our quarantine and recovery process immediately,” he wrote.

“We will get through this together”.

Mr Trump is 74, putting him at higher risk of serious complications from the virus. But he has consistently played down concerns about being personally vulnerable to contracting COVID-19.

“I felt no vulnerability whatsoever,” he said in May.

The diagnosis marks a major blow for a president who has been trying desperately to convince the American public that the worst of the pandemic is behind them, even as cases continue to rise with less than four weeks before the November 3 election.

And it stands as the most serious known public health scare encountered by any sitting American president in recent history.

Symptoms of COVID-19 can include fever, cough and breathing trouble.

Most people develop only mild symptoms. But some people, usually those with other medical complications, develop more severe symptoms, including pneumonia, which can be fatal.

Mr Trump had earlier confirmed he and the first lady were in quarantine while they awaited coronavirus test results after one of his senior aides was confirmed to have the virus.

Hope Hicks, who is counsellor to the President and travelled with him to a Wednesday rally, also tested positive to the virus on Thursday.

Ms Hicks has travelled with Mr Trump several times this week, including on the presidential helicopter for a Minnesota rally on Wednesday, and aboard Air Force One to Tuesday night’s presidential debate.

She began feeling ill on the flight home from Minnesota, according to an administration official, who spoke on condition of anonymity.

She was quarantined away from others on the plane and her diagnosis was confirmed on Thursday, the person said.

Mr Trump, who is reportedly tested almost daily for the virus anyway, said he and Ms Trump had been tested again and were awaiting the results.

“In the meantime, we will begin our quarantine process,” he wrote in a tweet.

Ms Hicks, who serves as counsellor to Mr Trump, also travelled with the president to his debate against rival Joe Biden in Cleveland on Tuesday.

Until the Trumps’ diagnoses, she was the most senior member of the White House to test positive.

Other staffers to have had the virus include Katie Miller, Vice President Mike Pence’s press secretary, national security adviser Robert O’Brien, and one of the President’s personal valets. Kimberly Guilfoyle, who is dating Trump’s oldest son, Donald Trump Jr., tested positive in South Dakota before an Independence Day fireworks show at Mount Rushmore.

On Thursday, Mr Trump went to New Jersey for a fundraiser. A schedule sent out by the White House for Friday included an intelligence briefing, a phone call on COVID-19 support for “vulnerable seniors,” a fundraiser at his Washington DC hotel and another rally in Sanford, Florida.

Ms Hicks was previously White House communications director. She quit that role early in 2018, only to re-join the administration this year ahead of the November 3 presidential election.

The US remains one of the country’s hardest hit by the pandemic. The virus has killed more than 210,000 Americans, and infected nearly 7.5 million.