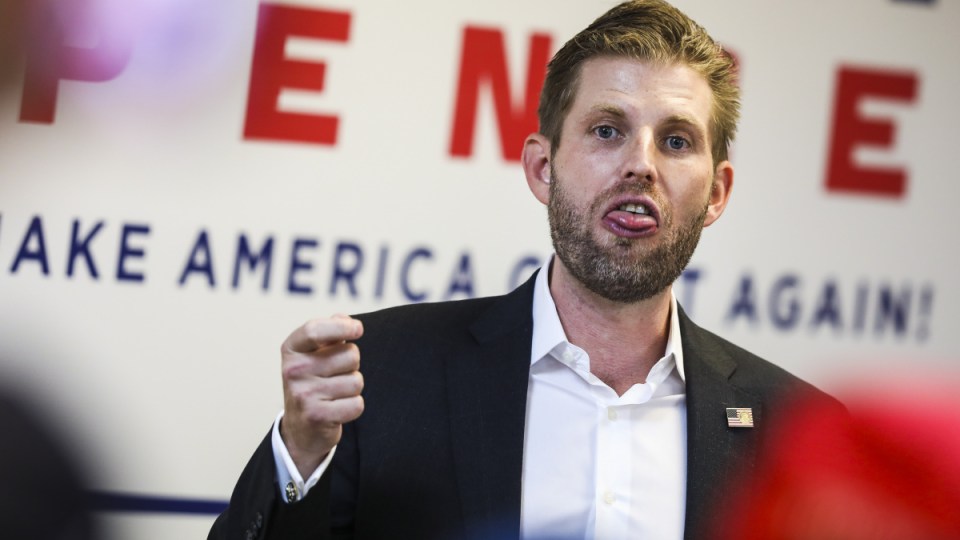 Eric Trump on the campaign trail for his father, Donald, earlier in September. Photo: Getty

A New York judge has ordered US President Donald Trump’s son Eric to make himself available by October 7 to be interviewed under oath for a state probe into financing for properties owned by his family’s company.

Justice Arthur Engoron of the Manhattan Supreme Court said on Wednesday (local time) that Eric Trump, an executive vice president at the Trump Organisation, offered no grounds to delay his deposition by the office of New York Attorney General Letitia James until after the November 3 presidential election.

At a hearing, Justice Engoron said Eric Trump’s argument that he was too busy working on his father’s re-election bid was unpersuasive, and said he was not “bound by the timelines of the national election”.

Lawyers for Eric Trump did not immediately respond to requests for comment.

Ms James has been conducting a civil probe into “potential fraud or illegality” concerning whether Donald Trump and the Trump Organisation overstated the value of assets to obtain loans and tax benefits.

Her probe began after Donald Trump’s former personal lawyer and fixer Michael Cohen told the US Congress the President had inflated some asset values to save money on loans and insurance, and deflated other values to reduce real estate taxes.

Ms James originally subpoenaed Eric Trump’s testimony on May 26. A scheduled July 22 deposition was cancelled as Mr Trump changed his legal team. His new lawyers were seeking a further delay until November 19 or later.

Matthew Colangelo, a lawyer for Ms James, said the threat of “personal inconvenience” to Eric Trump did not justify waiting that long.

“Mr Trump shouldn’t be able to profit from his own dilatory conduct,” Mr Colangelo told the judge.

In a statement, Ms James said the judge’s order made it clear that “not even an organisation or an individual with the name Trump” can dictate the parameters of her “lawful investigation”.

There has been no determination if any laws have been broken.

The investigation is separate from a criminal probe by Manhattan District Attorney Cyrus Vance, who is seeking eight years of Donald Trump’s tax returns through a separate subpoena.

A federal appeals court is scheduled to hear on Friday the President’s appeal of an order letting Mr Vance obtain his tax returns.

Mr Trump is a Republican, while Ms James and Mr Vance are Democrats.