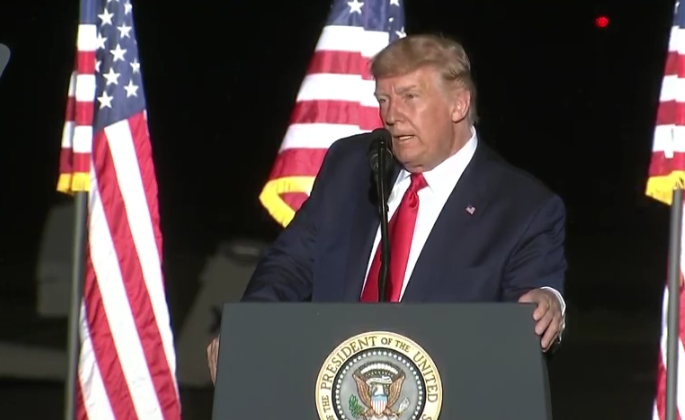 Donald Trump soaks up the applause in Nevada after insisting Joe Biden will need to cheat to claim the White House. Photo: C-SPAN

US President Donald Trump has barrelled into Nevada looking to expand his paths to victory while unleashing a torrent of unsubstantiated claims that Democrats were trying to steal the election.

Trump defied local authorities by holding a rally in tiny Minden after his initial plan to hold one in Reno was stopped out of concern it would have violated coronavirus health guidelines.

Unleashing 90-plus minutes of grievances and attacks, Trump claimed the state’s Democratic governor tried to block him and repeated his claim that mail-in ballots would taint the election result.

“This is the guy we are entrusting with millions of ballots, unsolicited ballots, and we’re supposed to win these states. Who the hell is going to trust him?” Trump said of Governor Steve Sisolak.

“The only way the Democrats can win the election is if they rig it.”

As part of his ongoing crusade against mail-in voting, lawyers for the President’s re-election campaign are urging a federal judge in Las Vegas to block a state law and prevent mail-in ballots from going to all active Nevada voters less than eight weeks before the election.

Addressing a mostly maskless and tightly packed crowd, Trump said, “I don’t have to be nice anymore,” and focused on tearing into Democratic opponent, Joe Biden.

Wow. This was the line to get into the Trump Rally in Minden, Nevada today.

Trump claimed the Democrat’s running mate, Senator Kamala Harris, would be president “in about a month” if Biden won, asserting that the former vice-president would be but a figurehead and that Harris would hold power.

He claimed the media would treat Biden “like Winston Churchill” if he was able to merely stand on the debate stage in three weeks.

And embarking on a swing that would also include stops in Las Vegas and Phoenix, Trump mocked Biden’s slower travel schedule. “You know where he is now? He is in his damn basement again!”

And, for good measure, Trump invoked his 2016 opponent, Hillary Clinton, leading the crowd to launch into its traditional “Lock Her Up!” chant.

The President claimed he usually tried to stop the chant but on Saturday declared, “I don’t care if you say it anymore” and, breaking yet another norm of the office, further suggested that Clinton “should be in jail.”

Trump also offered a fierce defence of his handling of the pandemic, which has killed more than 190,000 Americans and still claims nearly 1000 lives a day.

The White House announced Saturday that, while out west, Trump will also visit California on Monday to receive a briefing on the devastating wildfires raging through the region.