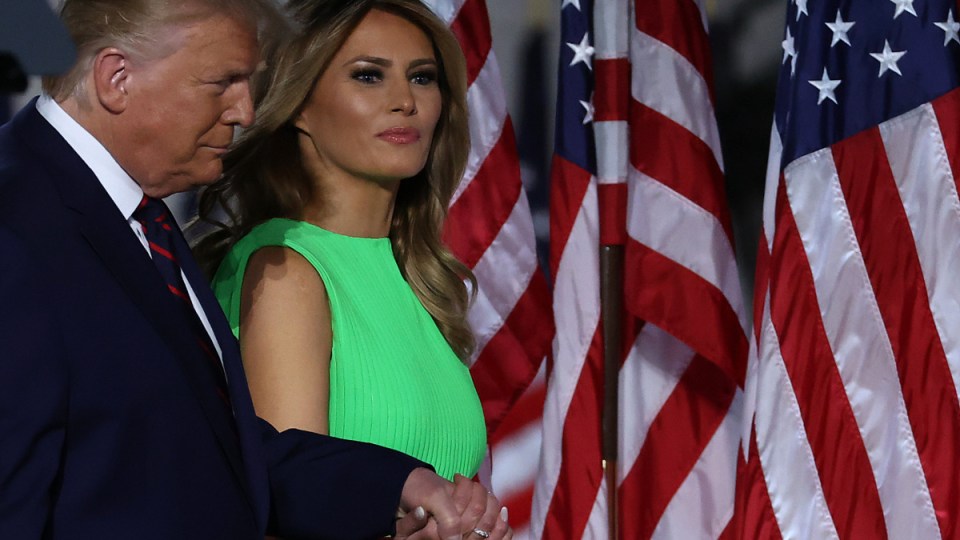 Mr Trump and wife Melania ahead of his acceptance speech. Photo: Getty

A defiant US President Donald Trump has accepted the Republican nomination for a second term with a blistering attack on Democratic rival Joe Biden.

Speaking from the White House South Lawn – despite criticism he was using the executive residence as a political prop – Mr Trump claimed a Biden victory in the November 3 election would only exacerbate the racial strife and coronavirus pandemic besieging the US.

Mr Trump portrayed Mr Biden, a career politician with a long record as a moderate, as a far-left extremist who would usher in a lawless, dangerous America.

“This election will decide whether we protect law-abiding Americans, or whether we give free rein to violent anarchic agitators and criminals who threaten our citizens,” he said in a rambling speech that lasted more than an hour on the fourth and final night of the Republican National Convention.

“No one will be safe in Biden’s America.”

Despite the pandemic, Mr Trump delivered his remarks in front of more than 1000 people, standing in front of dozens of American flags and basking in chants of “Four more years!” and “USA!”.

Though an incumbent, Mr Trump remains a self-styled outsider. That approach won him the White House, his first elected office, in 2016 on a promise to end the crime and violence he said was afflicting the country.

After days of civil unrest and violence in Kenosha, Wisconsin, where on Sunday police shot a black man, Jacob Blake, in the back, Republicans on Thursday sought to turn the chaos to their advantage by claiming Mr Biden would “defund the police”. Mr Biden has rejected that position.

In trying to paint Mr Biden as a tool of the “radical left”, Mr Trump also distorted the Democrat’s policy positions on other issues, including immigration, guns, law enforcement, abortion and energy production.

As the night unfolded, Mr Biden struck back on Twitter, writing: “When Donald Trump says tonight you won’t be safe in Joe Biden’s America, look around and ask yourself: How safe do you feel in Donald Trump’s America?”

But the President’s made-for-television scene stood in marked contrast with Mr Biden’s acceptance speech last week, which was broadcast live from a largely empty arena in a nod to the disease.

At the White House, the crowd was seated in white chairs just centimetres apart. There was little evidence of social distancing or face masks, despite health experts’ recommendations.

The coronavirus prompted both political parties to scale back their conventions and make events mostly virtual.

In a reminder of the country’s divisions, attendees could hear anti-Trump protesters at nearby black Lives Matter Plaza as he spoke.

More than 180,000 people have died in the US from the coronavirus – more than any other country – amid a fresh wave of protests over the latest high-profile police shooting of a black American.

In Kenosha, relative calm returned after three nights of civil strife ending on Tuesday, including arson, vandalism and deadly shootings.

Mr Trump, a former New York real estate developer, is seeking to turn around a re-election campaign that has been largely overshadowed by the health crisis that has put millions of Americans out of work.

In his speech on Thursday, Mr Trump repeated his assertion that China was to blame for the pandemic and promised to rebuild what Republicans have called the “greatest economy” in history. But opinion polls have shown most Americans are disappointed in his response to the coronavirus, which he played down for weeks.

Mr Trump kicked off the week on Monday by accusing Democrats of seeking to steal the election by advocating for mail-in voting. His previous high-profile speeches have also emphasised grim themes, including his inaugural address in January 2017 that described “American carnage”.

Trump lays into rival Biden as he accepts Republican nomination