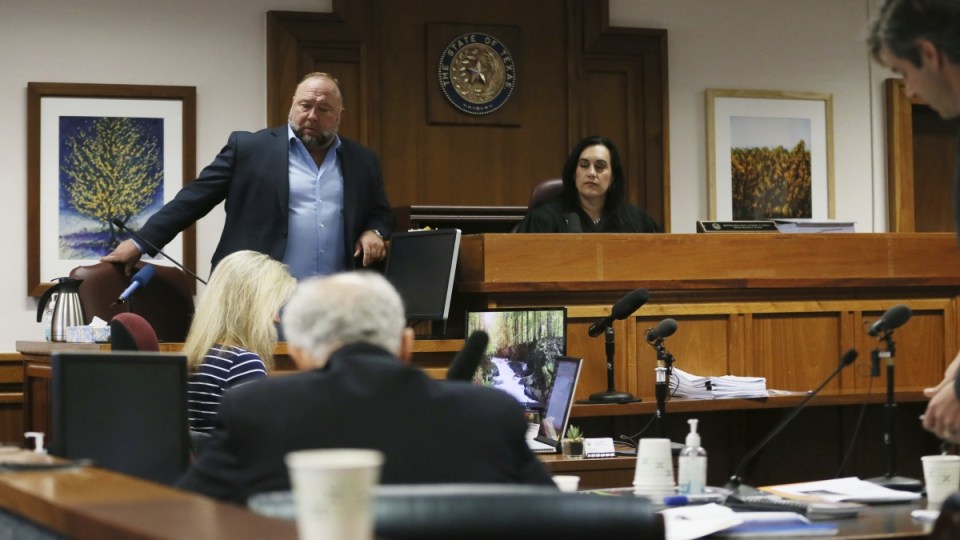 Alex Jones says he sought years ago to distance himself from the Sandy Hook hoax theory. Photo: AAP

Jurors in the Alex Jones defamation trial have begun deliberations after a lawyer for a child killed in the Sandy Hook massacre said they should “end this nightmare” and force the US conspiracy theorist to pay them $US150 million ($216 million) for falsely claiming the shooting was a hoax.

Jones, founder of the Infowars radio show and webcast, is on trial in Texas to determine how much he and his company, Free Speech Systems, must pay for spreading falsehoods about the killing of 20 children and six staff at Sandy Hook Elementary School in Newtown, Connecticut, on December 14, 2012.

Neil Heslin and Scarlett Lewis, the parents of slain six-year-old Jesse Lewis, testified during the two-week trial in Austin that Jones’ followers have harassed and sent them death threats for years in the false belief that they were lying about their son’s death.

During closing arguments on Wednesday, their lawyer, Kyle Farrar, urged jurors to end their nightmare and hold Jones accountable for profiting off their son’s death.

“He was making money off of it by spreading misinformation and spreading lies,” Mr Farrar said on Wednesday.

Federico Reynal, a lawyer for Jones, conceded during his closing argument that Jones and Infowars reported “irresponsibly” on Sandy Hook but said his client was not responsible for the harassment.

“We live in a community where some people just are unbalanced and are going to take action on their own,” Mr Reynal said.

Jones on Wednesday sought to distance himself from previous falsehoods that the shooting was a hoax, saying it was “crazy” of him to repeatedly make this claim.

Jones, who has previously acknowledged the shooting took place, told jurors the shooting was “100 per cent real”.

In a surprise development, Mark Bankston, another lawyer for the parents, said during cross-examination on Wednesday that Jones’ legal team had “messed up” and inadvertently sent the plaintiffs’ legal team a file containing trial strategy notes and years of texts.

Mr Bankston said the records undercut Jones’ testimony that he did not have any texts about Sandy Hook.

Mr Bankston also accused Jones of approaching the trial in bad faith, citing broadcasts where Jones said the trial was rigged against him and that the jury pool was full of people who “don’t know what planet they’re on”.

The lawyer on Wednesday showed jurors an image from Jones’s show that Bankston said depicted Judge Maya Guerra Gamble, who is overseeing the case, on fire. Jones responded that the image showed Lady Justice on fire, not Judge Gamble.

Judge Gamble admonished Jones on Tuesday for not telling the truth under oath after he falsely told the jury he was bankrupt and had complied with plaintiffs’ requests for information.

The Sandy Hook gunman, Adam Lanza, 20, used a rifle to carry out the massacre. It ended when Lanza killed himself with the approaching sound of police sirens.