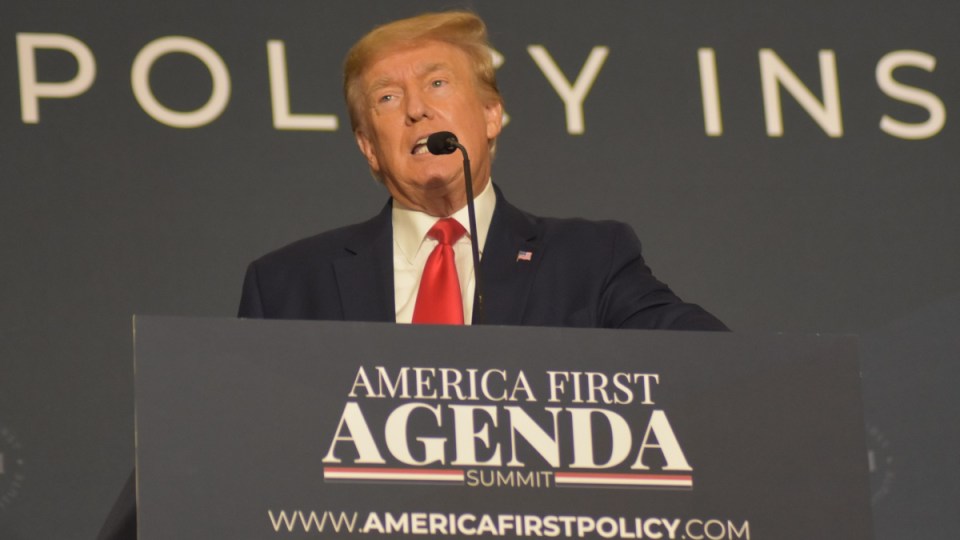 In his first speech in Washington since leaving office 18 months ago, the former US president stopped short of declaring his candidacy in the 2024 election. Photo: Getty Photo: Getty

Donald Trump has ignored pressure from some fellow Republicans to avoid repeating his false claims about a stolen 2020 election, insisting he won his second bid for the White House and would not allow his perceived enemies to bar a return.

In his first speech in Washington since leaving office 18 months ago, the former US president stopped short of declaring his candidacy in the 2024 election but predicted Republicans would retake the Senate, House of Representatives and White House.

“I ran the first time and I won. Then I ran a second time and I did much better … and you know what? That’s going to be the story for a long time, what a disgrace it was. But we may just have to do it again,” Mr Trump said in a 93-minute speech to the conservative America First Policy Institute.

Mike Pence, who was vice president under Mr Trump and may seek the White House in 2024, distanced himself from the repeated election falsehoods, saying at a separate event earlier in the US capital that conservatives needed to focus on the future.

“I don’t know that the president and I differ on issues. But we may differ on focus. I truly do believe that elections are about the future,” Mr Pence said across town at the Heritage Foundation think tank.

“In order to win, conservatives need to do more than criticise and complain. We must unite our movement behind a bold, optimistic agenda.”

Mr Trump used his speech to paint a picture of an America plagued by crime, violence, drugs and invasions of illegal migrants.

He predicted a future federal government controlled by Republicans that he said should impose the death penalty on drug dealers, use the National Guard to stop violence in states and cities, and relocate the urban homeless to tent encampments on the outskirts of US cities.

Last week the congressional committee investigating the January 6, 2021, assault on the US Capitol depicted Mr Trump as ignoring pleas of family and aides to intervene as he watched his supporters on live TV attack the seat of Congress for hours in a failed bid to stop certification of his loss.

Mr Trump dismissed the panel as “hacks and thugs”.

“They really want to damage me so I can no longer go back to work for you. And I don’t think that’s going to happen,” Mr Trump said.

Mr Trump remains the leading figure in the Republican Party.

But while he flirts with a 2024 presidential run, his standing has weakened slightly, with some 40 per cent of Republicans saying he is at least partly to blame for the January 6 riot, compared with 33 per cent in a poll conducted by Reuters/Ipsos as the hearings got under way six weeks ago.

The January 6 committee is trying to build a case that Mr Trump’s efforts to overturn his defeat by Joe Biden in November 2020 constitute dereliction of duty and illegal conduct, rendering him unfit to return to the White House.

Waning popularity could encourage potential rivals to run, including Florida Governor Ron DeSantis, who is among those manoeuvring for possible Republican primary challenges in 2024.