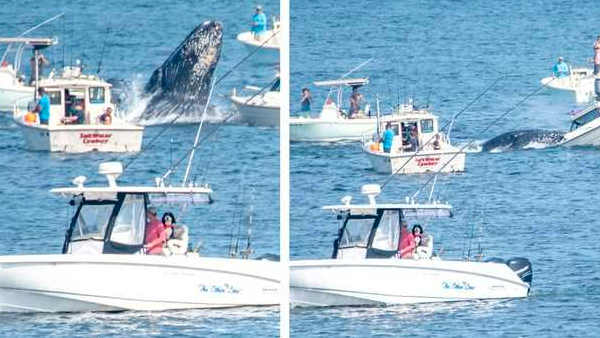 A humpback whale crashed into the bow of a 19-foot boat in Plymouth, Massachusetts. Photo: Facebook / Town of Plymouth, MA

Recreational fishers received the shock of their lives on Sunday morning US time when a humpback whale breached the water and landed on the bow of their 19-foot boat.

Footage of the incident shows the whale leaping out of the water before landing on the boat and smashing its glass hatch.

The boat crashed up and down in the water but remained afloat and suffered no damage that affected its seaworthiness.

The collision is the latest in a string of recent whale encounters off the coast of Plymouth, Massachusetts – prompting the local harbourmaster, Chad Hunter, to advise boaters to keep their distance.

“The Plymouth Harbormaster Department recommends a distance of at least 100 yards to minimize potential interactions with whales,” the Town of Plymouth said in a statement.

“This interaction, while rare, is a reminder that these interactions can be dangerous for both boaters and whales.”

Mr Hunter said an abundance of bait fish had simultaneously attracted more recreational fishers and whales to the area – leading to more encounters.

Sunday’s collision came after another boat in the same area was bumped by a whale on Friday in an incident caught on camera by local paddleboarder Bob Babcock.

Mr Babcock told NBC10 Boston he had never seen whales come so close to the shore in more than 16 years’ worth of paddleboarding.

Plymouth-based not-for-profit Whale and Dolphin Conservation (WDC) said the whales spotted off the Massachusetts coast were humpback whales between 35 and 55 feet long that weighed up to 40 tonnes.

The group said the whales typically visit the Massachusetts waters to eat bait fish as part of their annual migration, but never usually came this close to shore.

“During their annual migration, humpback whales come to the nutrient-rich waters of Massachusetts to find their favourite food – small, bait fish,” the group said in a statement.

“Although not commonly seen this close to shore, humpback whales will follow their food to shallower waters.”

The group said that photos of the recent incidents suggested the whales were “lunge feeding” – “a behavior where humpback whales will corral bait fish and then lunge through to engulf a mouthful of fish and sea water”.

“From what we have seen, there is not a lot of “breaching” going on but rather lunge feeding, which is based on where the fish are schooling,” WDC executive director Regina Asmutis-Silvia said.

“Feeding whales are often distracted whales making it more important for boaters to be watching for them as the whales are very focused on fish at that point, not boats.”