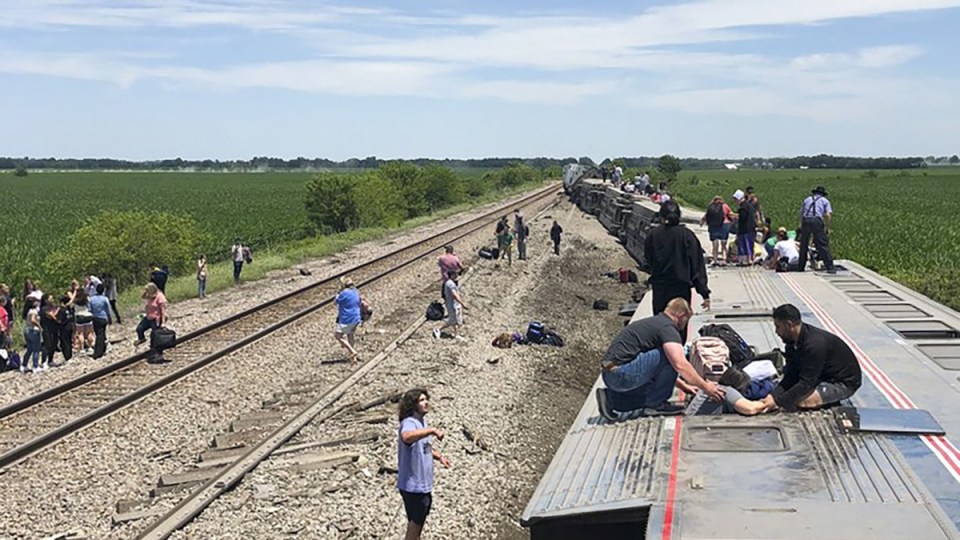 A passenger train travelling from Los Angeles to Chicago has struck a dump truck and derailed in a remote area of Missouri, killing three people and injuring dozens more.

Two of the people who died were on the Amtrak train and one was in the truck, Missouri State Highway Patrol spokesman Justin Dunn said.

It was not immediately clear exactly how many people were hurt, the patrol said, but hospitals reported receiving more than 40 patients from the crash and were expecting more.

Amtrak’s Southwest Chief was carrying about 243 passengers and 12 crew members when the collision happened on Monday afternoon (local time) near Mendon at a rural intersection with no lights or electronic controls, officials said.

A team of investigators from the National Transportation Safety Board will arrive on Tuesday.

At one point, helicopter video of the site from KMBC-TV in Kansas City showed rail cars on their side as emergency responders used ladders to climb into one.

Six medical helicopters parked nearby were waiting to transport patients.

Passengers on the train included 16 young people and eight adults from two Boy Scout troops who were travelling home to Wisconsin after a visit to New Mexico.

No one in the group was seriously injured, a Boy Scouts of America spokesman said.

High school students from Pleasant Ridge High School in Easton, Kansas, who were headed to a Future Business Leaders of America conference in Chicago, were also aboard, Superintendent Tim Beying told The Star.

It was the second Amtrak collision in as many days. Three people were killed on Sunday afternoon when an Amtrak commuter train smashed into a car in northern California.

Mendon, with a population of about 160, is about 135 kilometres north-east of Kansas City.