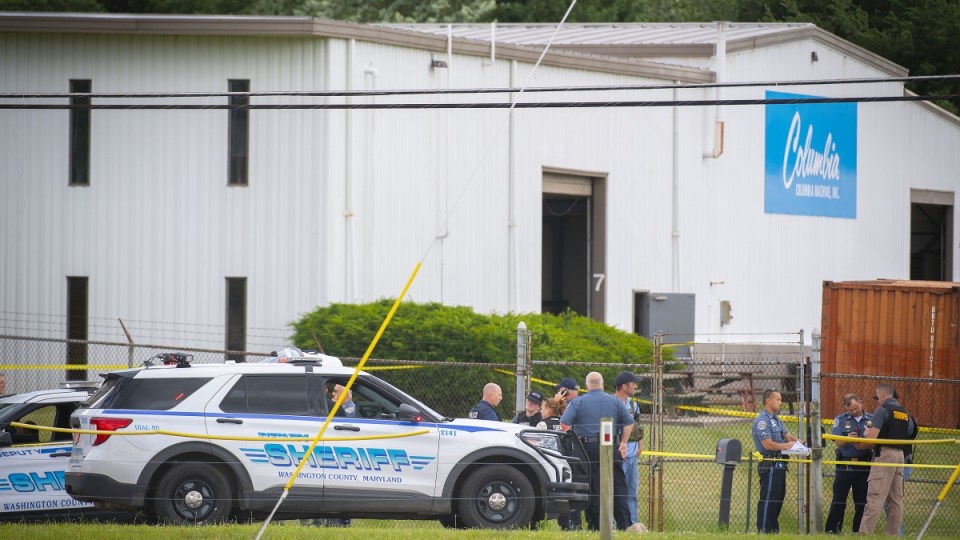 Police officers at the scene of a fatal shooting in the US state of Maryland. Photo: AAP

A gunman has opened fire on his co-workers at a manufacturing facility in the US state of Maryland, killing at least three people and critically wounding a fourth before being taken into custody after a shootout with police.

The 23-year-old assailant, who was not identified by police, was wounded in an exchange of gunfire with a Maryland state trooper while trying to flee in a car, Washington County Sheriff Douglas Mullendore told a news conference.

The suspect and trooper were taken to a local hospital for treatment of gunshot wounds in the latest in a series of mass shootings to plague the US.

Washington County Sheriff Mullendore declined to elaborate on the circumstances or possible motives behind the attack but said the gunman and all of his victims were employees of Columbia Machine in Smithsburg, in north-west Maryland near the Pennsylvania state line.

He said the shooter used a semi-automatic pistol handgun.

A Columbia Machine official said the company was co-operating with authorities in their probe into the shooting but declined to comment further.

The company supplies concrete manufacturing equipment to customers in more than 100 countries, according to its website.

The Baltimore offices of the FBI and US Bureau of Alcohol, Tobacco, Firearms and Explosives said they were sending agents to the scene.

The killings in Uvalde and a mass shooting at a grocery store in Buffalo, New York, days earlier that left 10 people dead, have prompted new efforts in US Congress to enact stricter federal gun control laws.