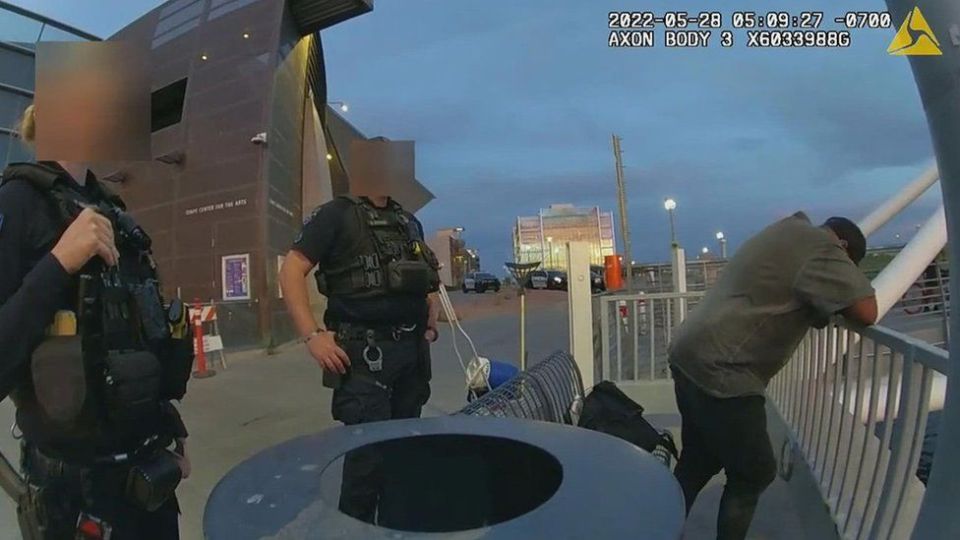 A homeless man pleaded to officers he was "going to drown" moments before his death. Photo: Tempe Town Police

Three US police officers have been sent on forced leave after refusing to save a homeless man from drowning.

Newly released bodycam footage and transcripts from the death of Arizona man Sean Bickings in May showed nearby officers failing to do their duty as a panicked Mr Bickings told them he was “going to drown”.

He told several nearby Tempe Town Lake Police officers multiple times that he was in danger — but none intervened to save him.

“I’m not jumping in after you,” one officer is heard saying in the 12-minute bodycam video.

According to the transcript, his last audible words were, “Can you hear me?”

He was later declared dead.

According to a Tempe Town Lake statement released on Monday night, police were responding to a reported disturbance between Mr Bickings and his partner. Her name has been given only as Susan.

Officers reported the couple “cooperated fully and denied that any physical argument had taken place”.

However, while police ran their names through a database to see if they had any outstanding arrest warrants, Mr Bickings climbed over a nearby metal fence dividing the boardwalk and lake, and jumped into the water.

Footage was cut short after the 34-year-old told officers he was going “for a swim”, wading out about 20 metres before finding himself in danger.

“So what’s your plan right now?” asks an officer.

The officer tells him “No, you’re not.”

Mr Bickings repeats that he is drowning.

“OK, I’m not jumping in after you” one officer says.

The officers instruct him to swim to a pylon as he again begs for help.

Police then argue with Susan.

“Stop. Get off of me. He didn’t do nothing wrong,” she says in the transcript. “I love, I love him. Please stop being so aggressive.”

They tell her to “chill out” and “get off of the bridge.”

The video ends, “due to the sensitive nature of the remaining portion of the recording”.

Transcript of the remainder of the exchange highlighted Susan becoming increasingly distressed. The officers said a boat was coming for him.

“He’s drowning right in front of you and you won’t help,” she said.

Mr Bickings did not resurface.

The three officers involved in the incident have not been identified.

They have been placed on “non-disciplinary paid administrative leave”,  while the Arizona Department of Public Safety and neighbouring police department, Scottsdale Police, to investigate the drowning.

Kate Winslet like you’ve never seen her, as Avatar director hits back at critics before film’s release
Six killed in latest US gun violence
Today's Stories

‘Going to drown’: US police investigated after refusing to save man