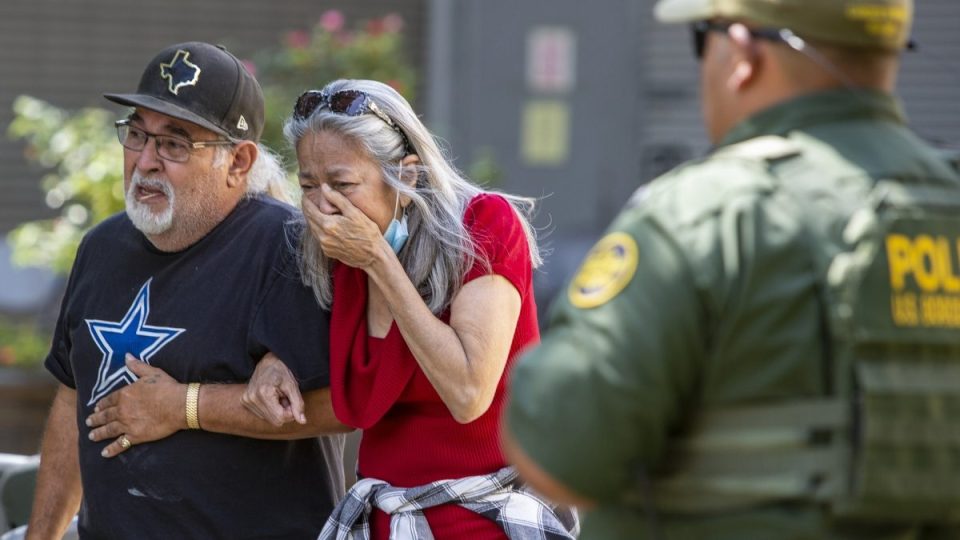 “I am sick and tired of it. We have to act,” an emotional Joe Biden has said as the toll from yet another horrific US school shooting continues to rise.

The US President delivered an emotional call for new restrictions on firearms after a gunman opened fire at a Texas primary school on Tuesday (local time).

At least 21 people – two adults and 19 children, believed to all be aged under 10 – have so far been declared dead. Many more have been injured.

The first of those killed to be identified are fourth grade teacher Eva Mireles and 10-year-old student Xavier Lopez.

“When in God’s name are we going to stand up to the gun lobby?” a visibly shaken Mr Biden said at the White House shortly after returning from a five-day trip to Asia that was bookended by tragedy.

Just two days before Mr Biden left on his trip to the Quad leaders’ summit in Tokyo, he met victims’ families after a hate-motivated shooter killed 10 black people at a grocery store in Buffalo, New York.

The back-to-back tragedies served as sobering reminders of the frequency and brutality of a US epidemic of mass gun violence.

“These kinds of mass shootings rarely happen anywhere else in the world,” Mr Biden said. “Why?”

He directed flags to be flown at half-mast across the US until sunset on Saturday in honour of the victims in Texas.

It came as more details emerged from the horrifying scenes from Robb Elementary School in the small town of Uvalde, Texas, about 137 kilometres west of San Antonio.

US Border Patrol agents have told how they responded to calls for help from the primary school, and “faced gunfire from the subject, who was barricaded inside”.

“At least one Border Patrol agent was wounded by the shooter during the exchange of gunfire,” spokesperson Marsha Espinosa said in a tweet.

“On-and-off duty Border Patrol agents arrived on the scene to assist with transferring students safely to their families and providing medical support.”

Ramos, a student at the nearby Uvalde High School, reportedly shot his grandmother before embarking on his horrendous attack. She was later flown to hospital, where she is in a critical condition.

“It is being reported that the subject shot his grandmother right before he went into the school,” Governor Abbott said.

“I have no further information about the connection between those two shootings.”

Ramos drove to Robb Elementary School, abandoning his car after he crashed it into a nearby ditch.

“That’s where he exited his vehicle with what I believe was a rifle and that’s when he attempted to enter the school where he was engaged by law enforcement,” Texas Department of Public Safety Sergeant Erick Estrada told CNN.

“Unfortunately, he was able to enter the premises and then from there that’s when he entered several classrooms and started shooting his firearm.”

Sergeant Estrada said the gunman was seen with a “long rifle and backpack”, and was also wearing body armour. There are multiple reports in the US media that he received the guns for his 18th birthday.

Ramos reportedly posted images of two AR15-style rifles to his Instagram page in the days before the shooting. The page has since been deleted.

Uvalde Memorial Hospital said it was treating 15 students in its emergency department. Two patients were transferred to San Antonio for further treatment, with another waiting a transfer.

The hospital said it also had a 45-year-old patient who had been grazed by a bullet.

The two patients being treated at San Antonio’s University Health were a 66-year-old woman and a 10-year-old girl. Both are in critical conditions.

Two adult victims of the shooting, both in critical condition, are also being treated at Brooke Army Medical Centre in San Antonio.

Law enforcement sources told America’s ABC News that several of the shooting victims were the children of Customs and Border Patrol agents.

Uvalde Mayor Don McLaughlin did not confirm casualties, but told ABC News in a text message that “this is a very bad situation”. He said his office was trying to contact parents before releasing any information.

Tuesday’s shooting – the deadliest school attack in the US since 20 students and six adults died in the Sandy Hook shooting in 2012 – has rocked America.

Non-profit anti-violence group Gun Violence Archive said there had been 212 mass shootings in the US this year – with Tuesday, May 24, only the 144th day of the year.

CNN and the GVA define a mass shooting as a shooting that injured or killed four or more people, not including the shooter.

Tuesday’s shooting has sparked a wave of emotion and anger across the US, with pleas emerging for action on gun control.

Vice President Kamala Harris said that people normally declare in such moments, “our hearts break. But our hearts keep getting broken … and our broken hearts are nothing compared to the broken hearts of those families”.

“We have to have the courage to take action … to ensure something like this never happens again,” she said.

Former president Barack Obama said the US was paralysed “not by fear, but by a gun lobby and a political party that have shown no willingness to act in any way that might help prevent these tragedies”.

“We owe these families – and the families who have experienced similar losses, including as recently as last week in Buffalo – action. Enough is enough. The American people overwhelmingly agree,” he said.

“Our elected leaders at the local, state, and federal levels, regardless of party, must find common-sense ways to keep our children and communities safe. They can do so without touching the right to hunt, sport shoot, and keep guns for self-defence.

“Propaganda and paranoia have kept us from helping each other on this for too long. We can do – and be – better. The time to act is now.”

But already there are signs it won’t be easy. Republican senator Thom Thillis has warned against a “reflexive reaction” to the latest school shooting.

“What we need to avoid is the reflexive reaction we have to say this could all be solved by not having guns in anyone’s hands. We can always talk about reasonable measures, but we also have to talk about better situational awareness,” he said.

“I’m almost certain that in the coming days or weeks, we’re going to find out that there were signs that this person was at risk, and we need to have an equal or greater attention on prevention and that’s a key part of it,” the North Carolina Republican told CNN.