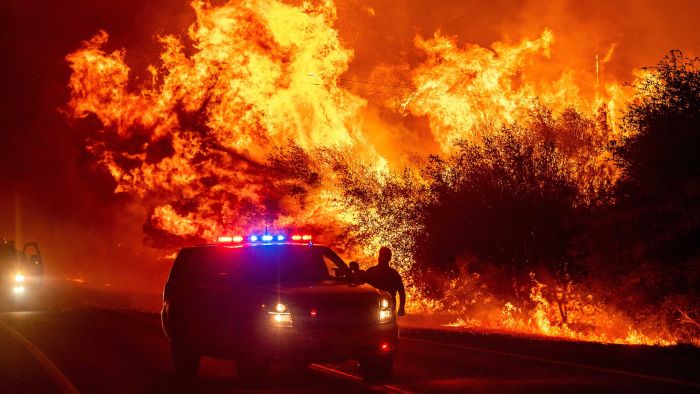 Wildfires in the US Southwest have burned dozens of homes in northern Arizona and put numerous small villages in New Mexico in the path of danger.

After 30 years of drought the wind-driven fire fronts have chewed up wide swaths of tinder-dry forest, filling the sky with plumes and blankets of smoke.

Firefighters working to keep more homes from burning on the edge of a mountain town in northern Arizona were helped by some snow, scattered showers and cooler temperatures early on Friday.

But the favourable weather did not last and more gusts were expected to batter parts of Arizona and all of New Mexico through the weekend.

Crews were tackling more than a dozen large fires on Friday nationwide, according to the National Interagency Fire Center.

More than 1600 firefighters were battling six blazes in New Mexico and three in Arizona that have consumed more than 260 square kilometres of timber and brush.

By Friday afternoon winds were howling across New Mexico, gusting up to 120km/h near the Colorado line, shrouding the Rio Grande Valley with dust and pushing flames through the Sangre de Cristo Mountains in the north.

A wall of smoke stretched from wilderness just east of Santa Fe some 80km to the northeast where ranchers and other rural inhabitants were abruptly told to leave by law enforcement.

With no air support or crews working directly on the fire lines, there was explosive growth in a number of fires.

In Arizona, flames raced through rural neighbourhoods outside Flagstaff just days earlier. A break in the weather on Thursday allowed helicopters to drop water on the blaze and authorities to survey the damage.

They found 30 homes and numerous other buildings were destroyed, with sheriff’s officials saying over 100 properties were affected. That fire has burned close to 85 square kilometres and forced evacuations of 765 homes after starting last Sunday.

Climate change has made wildfires a year-round threat, given changing conditions that include earlier snowmelt and rain coming later in the autumn.

The fire hazard has also been exacerbated by decades of poor forest management and policies aimed at suppressing fire rather than allowing more frequent blazes to reduce ground fuels.

US eases Cuba money, travel restrictions
US tells Solomons it will ‘respond accordingly’ to security deal with China
Today's Stories