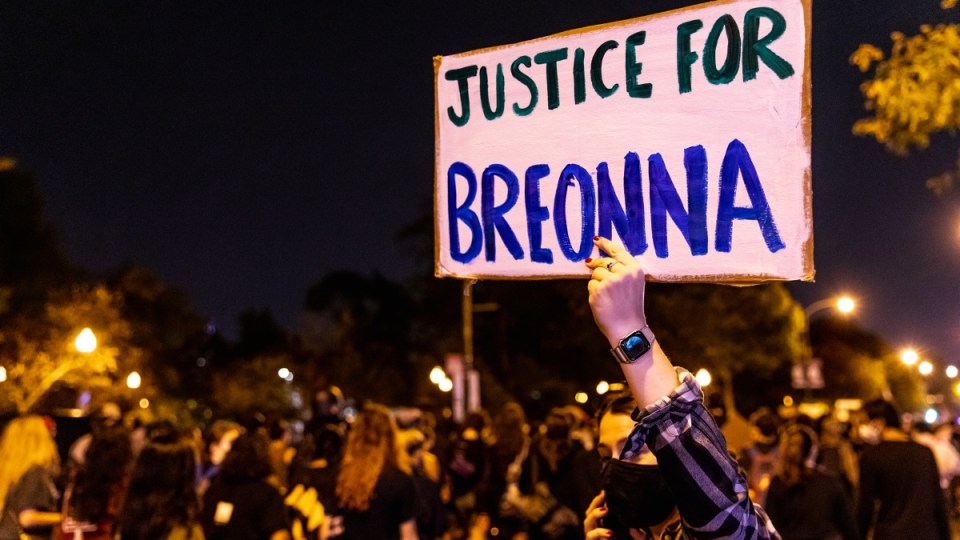 The death of Breonna Taylor was one in a trio of cases that fuelled protests against racial injustice and police violence in the US. Photo: Getty

A US jury has acquitted a former detective of endangering neighbours of Breonna Taylor during a botched raid that killed the woman in her home, clearing law enforcement of all criminal liability in a case that rocked the United States in 2020.

Detective Brett Hankison, 45, whose stray bullets hit a neighbouring apartment in the Kentucky city of Louisville during the execution of a “no knock” search warrant after midnight, was the only officer charged in the case, with wanton endangerment.

Mr Hankison could be heard sobbing behind his face mask as the verdict was read three times, one for each of the occupants of the neighbouring apartment, according to a Court TV reporter who was in the courtroom on Thursday.

Relatives of Ms Taylor who were in the gallery also wept, the reporter said.

The jury deliberated for about three hours after hearing closing arguments on Thursday at the conclusion of a one-week trial at Jefferson County Circuit Court.

The death of Ms Taylor, a 26-year-old emergency medical technician who was unarmed, was one in a trio of cases that fuelled a summer of protests against racial injustice and police violence two years ago, when the country was reeling from the still-new coronavirus pandemic.

The other cases resulted in guilty verdicts for the murders of two African-American men in 2020: George Floyd in Minneapolis and Ahmaud Arbery in Brunswick, Georgia.

Those convictions had offered a measure of justice after activists and victims have said their protests against racial violence were largely ignored before the advent of mobile phone video.

In this case, a grand jury cleared the two white officers who shot Ms Taylor but charged Mr Hankison for endangering neighbours in the adjacent apartment.

A grand juror on the case later said Kentucky Attorney General Daniel Cameron only presented the wanton endangerment charges against Mr Hankison to the grand jury.

That meant the only trial to result from her death hinged on whether a police officer was justified in firing his weapon upon hearing a barrage of gunfire.

“Today’s decision adds to the frustration and anger of many over the inability to find more accountability for the tragic events of March 13, 2020,” Louisville Mayor Greg Fischer said in a statement. “I know that for many, justice has still not been achieved.”

Police wanted to search the home in connection with a drug investigation in which Ms Taylor’s ex-boyfriend was a suspect.

After police broke down Ms Taylor’s door, her new boyfriend, fearing a break-in and saying he did not hear police identify themselves, fired one shot from a handgun that wounded an officer. That officer and another returned fire, shooting 22 times.

In tearful testimony on Wednesday, Mr Hankison said he mistakenly believed his fellow officers were coming under heavy fire. He shot 10 times from outside the apartment.

“I think it was absolutely the fact that he was doing his job as a police officer,” defence attorney Stew Mathews told reporters after the verdict, according to the Louisville Courier Journal.

Ms Taylor’s death at first drew little national attention but was thrust into prominence after a Minneapolis police officer killed Floyd by pinning a knee to his neck on May 25, 2020.

Around then, a video surfaced showing the February 2020 shooting death of Mr Arbery after he was chased by three white men.

The three civilians charged in Mr Arbery’s death were convicted of murder in a state trial last year.