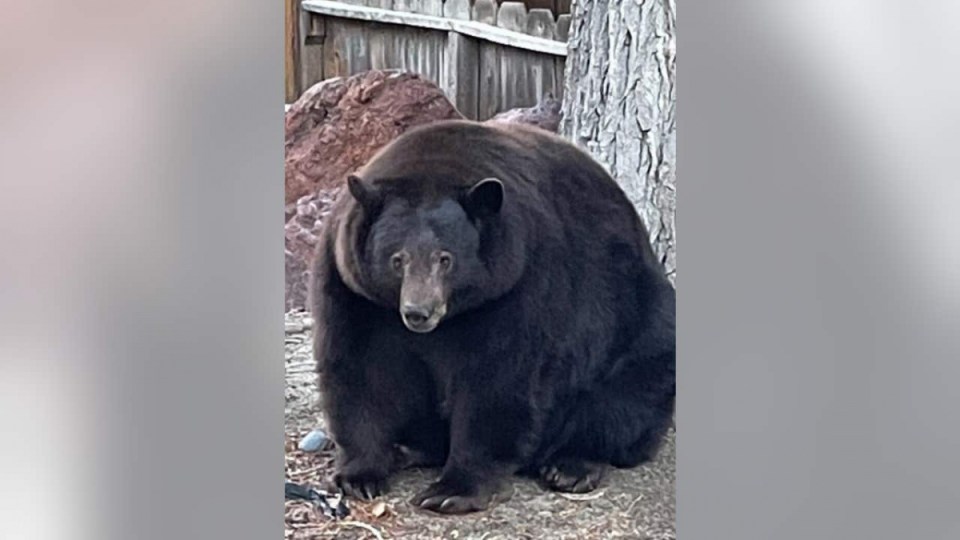 A 227 kg black bear, known as "Hank the tank" is terrorising a US town. Photo: Twitter

A 227-kilogram black bear dubbed “Hank the Tank” is making waves in a California community, as he makes himself all too much at home after breaking into dozens of homes.

Hank, who earned his name because of his giant size, has become a nuisance in the city of South Lake Tahoe, east of Sacramento, after months of break-ins in search of tasty snacks in recent months.

Hank weighs up to twice as much as the average black bear, which usually range from 50-150 kilograms. He is said to be very identifiable due to his “exceptionally large size and dark coat with a lighter muzzle”.

He’s also giving the city’s authorities and 21,000 residents plenty of grief as they debate how to respond to the “extremely food-habituated” bear. Hank is said to have caused widespread damage, breaking into at least 38 homes and prompting more than 100 worried calls to the California Department of Fish and Wildlife.

California Department of Fish and Wildlife representative Peter Tira told The New York Times, that local police have tried to move Hank on with the aid of with sirens and paintballs but he is too keen on eating human food to care anymore.

“It’s easier to find leftover pizza than to go in the forest,” Mr Tira said.

He said Hank “sees people and homes as a source of food”.

“This is a bear that has lost all fear of people. It’s a potentially dangerous situation,” he said.

Local bear sanctuaries are reportedly too full to take him and, according to some US media, some locals believe the only option is to have Hank captured and killed.

However, South Lake Tahoe Police Department appeared a lot less concerned about the bear in its response to his most recent break-in last week.

Calling him “our big bear friend”, local police posted on social media after Hank was found inside a Tahoe Keys home.

“This bear did not break into a garage, where trash was kept that he was sniffing out. He broke into a secured home, through the small window in the photo, and somehow squeezed inside,” police said.

They said officers banged on the exterior of the home and a compliant Hank left through the back door.

There have so far been no reports of the hungry bear injuring or attacking anyone.

Ann Bryant, the executive director of the Bear League, said Hank hadn’t yet been a danger to anyone yet.

South Lake Tahoe police have urged residents to apply for a “bear box”, a Hank-proof container that can be used to store food. They also want the local home owners’ association to fund the boxes.

CBS News reports a meeting between local authorities about Hank’s future will be held in Tahoe Keys on Wednesday.

‘Hank the Tank’, a 227-kilogram bear, terrorises US town