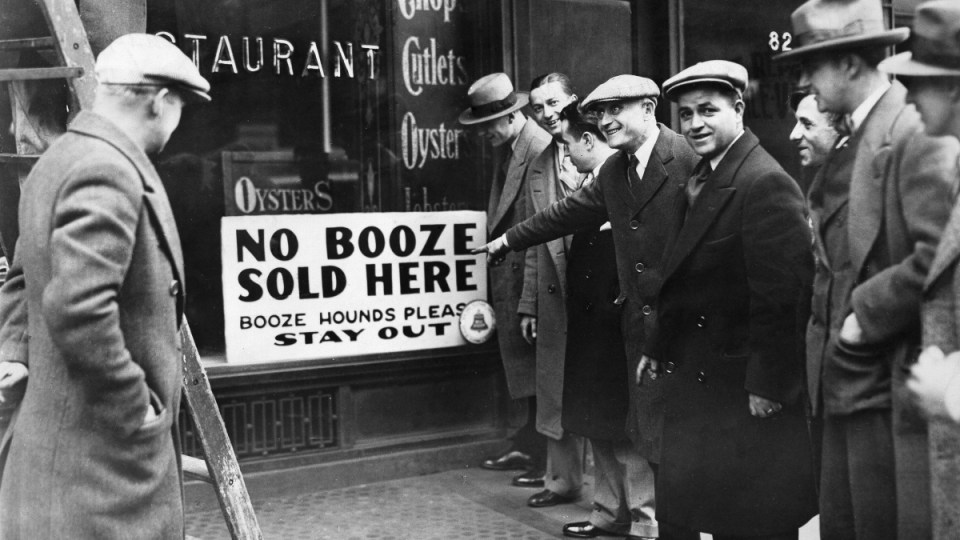 January 17, 1920 marks the day the prohibition of alcohol came into effect in the US. Photo: Getty

On this day 102 years ago, the first day of the prohibition of alcohol came into effect in the United States, paving the way for an era of gangsters and illegal activity across America.

On January 17, 1920, the sale, manufacturing and transportation of intoxicating liquors became illegal in the US, under the 18th Amendment to the United States Constitution.

Throughout the country, establishments for illicit drinks were forced to close their doors, with federal authorities and a widespread Temperance movement blaming alcohol for worsening crime and violence.

However, the 13-year experiment backfired – giving rise to a new underclass of criminals just as the country was shaking off the devastating effects of the Great Influenza pandemic and World War I.

US authorities were concerned that the country’s rapid post-war urbanisation had been accompanied by a surge in gambling, street fighting and domestic violence.

And so they enacted the National Prohibition Act to clean up society.

But crime organisations soon took advantage of the obvious opportunities to illegally manufacture and transport alcohol.

Despite hefty repercussions, the authorities’ hopes of an entirely arid desert of alcohol consumption were thwarted by citizens’ desires, leading to gangsterism and bootlegging.

Strong demand for alcohol opened the door for the nation’s gangsters to fill the void, with notorious crime bosses such as Al Capone starting syndicates to capitalise on the commercial potential of prohibition.

Crowds of drinkers fought against the social reform, with illegal drinking dens known as speakeasies flourishing in cities across the US.

Chicago gangster Capone, who was born on January 17, 1899, was one of the first to take advantage of America’s new laws, illegally running and supplying alcohol to thirsty Americans and paying substantial bribes for authorities to look the other way.

According to reports, Capone earned as much as $US100 million a year, equal to $US1.4 billion ($1.9 billion) in 2022, from his spoils of illegal distilleries, casinos and speakeasies.

Prohibition was repealed on December 5, 1933.

On This Day: Prohibition begins in US, igniting gangster era