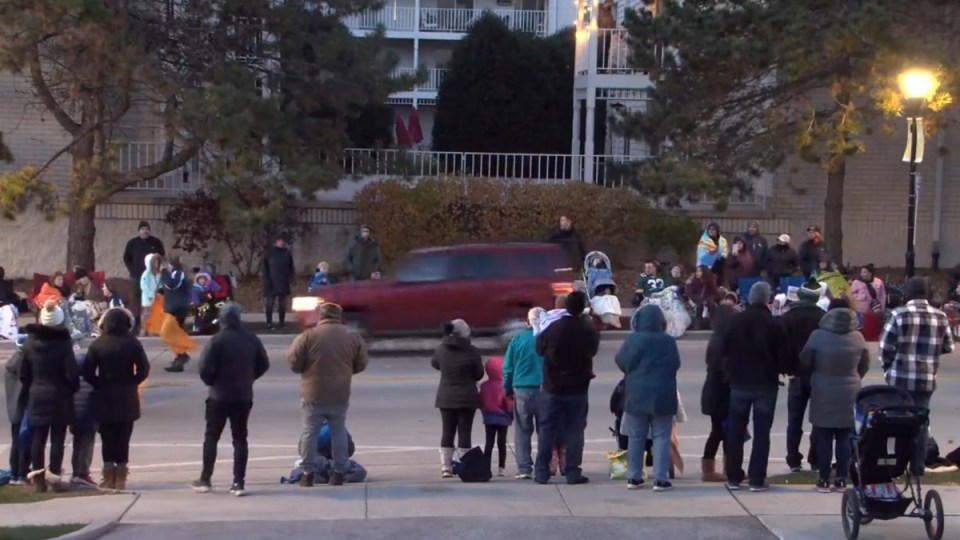 A video grab of the red four-wheel-drive driving through the parade crowd. Photo: AAP

A four-wheel-drive has ploughed through a Christmas parade in suburban Wisconsin, hitting more than 20 people – including children – and leaving some dead.

In one video posted on social media, a red sport utility vehicle, thought to be a Ford Escape, appeared to speed toward marchers from behind.

In a second video, police appeared to open fire on the vehicle as it crashed through street barriers in Waukesha, about 30 kilometres west of Milwaukee, on Sunday (local time).

Local police chief Dan Thompson said a person of interest was in custody and the suspect vehicle had been recovered after the incident.

“A red SUV drove into our Christmas parade that we were holding downtown. More than 20 individuals were injured as a result of this incident,” Mr Thompson said.

Asked about the fatalities, he said only: “I don’t have an exact number at this time.”

It was not known whether the incident was related to terrorism, he added.

“As we were walking back in between the buildings … we saw an SUV cross over, just put the pedal to the metal and just zooming full speed along the parade route. And then we heard a loud bang, and just deafening cries and screams from people who are struck by the vehicle,” Angelito Tenorio, an alderman in nearby West Allis, told the newspaper.

Angela O’Boyle, who lives in an apartment overlooking the parade route, said she was on the balcony watching the festivities on Sunday night.

“The next thing I heard were screams and turned my head and saw the car come and plough into the band that was just passing my balcony at that point,” she told CNN.

“It hit at least two people right away and rolled over them. And then continued down the road to People’s Park, which is at the end of the block – and then kept going, it didn’t stop.”

“It was not something that I wanted to see,” she said.

One witness told local TV the four-wheel-drive hit a dance group of girls aged between nine and 15 years old.

Police confirmed that some of those hit were children.

“The vehicle struck more than 20 individuals. Some of the individuals were children and there are some fatalities as a result of this incident,” Mr Thomson said.

“We will not be releasing information on the fatalities at this time while we are working on notifying the family members of the deceased.”

Corey Montiho, a Waukesha school district board member, told the Milwaukee Journal Sentinel that his daughter’s dance team was hit by the Ford.

“There were pom-poms and shoes and spilled hot chocolate everywhere. I had to go from one crumpled body to the other to find my daughter,” he said.

Local mayor Shawn Reilly told a media briefing: “Tonight was a traumatic situation for the City of Waukesha.”

Photos and videos of the town circulating on social media showed police cars and ambulances crowding a street decked out with Christmas lights in the aftermath.

Waukesha schools will be closed on Monday, while counselling is being offered to students.

It is not yet known if the incident had any terrorism links.

‘Some dead’ after car ploughs into parade crowd