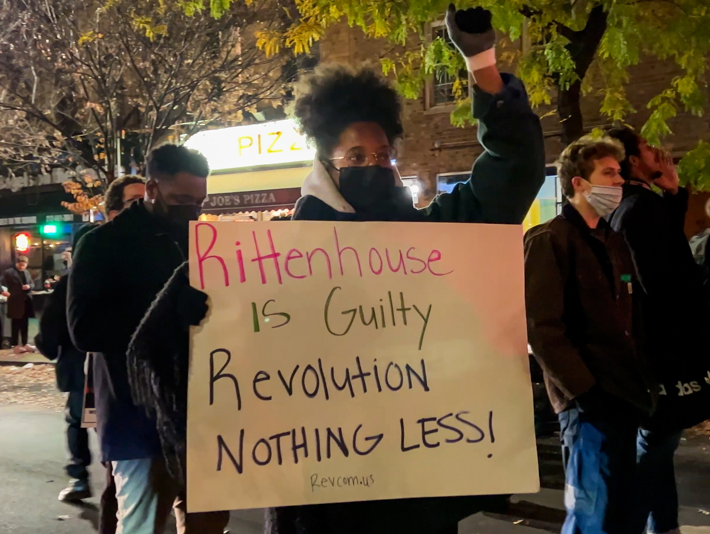 A protester demands reform at a post-verdict demonstration in New York's Greenwich Village - one of scores of protests across the country. Photo: Getty

Police in the US city of Portland have declared a riot emergency after a band of about 200 demonstrators rampaged through the Oregon town to protest the acquittal of Kyle Rittenhouse, who killed two people and injured another in Wisconsin.

The protest was just one of scores of demonstrations across the country after jurors delivered their controversial verdict.

Portland police officials described protesters breaking windows, pelting police with rocks and bottles, and threatening to burn down a government building in the city’s CBD.

Several people were given citations before the crowd dispersed by about 11pm, the Portland Police Bureau said, but only one person who had an outstanding warrant stemming from another matter was arrested.

The protesters gathered following the acquittal of Rittenhouse, 18, in Kenosha, Wisconsin. Rittenhouse killed two people and injured another during a protest against police brutality in Wisconsin last year.

The jury concluded the teen acted in self defence after being pursued by and attacked by Black Lives Matter activsts, one of whom hit him with a skateboard while another was caught on video brandishing a gun.

Protests have been held in several other US cities nationwide over the verdict, including New York, Los Angeles and Chicago.

About 1000 people marched through downtown Chicago on Saturday afternoon, organised by Black Lives Matter and other local activist groups.

According to the Chicago Tribune, protesters held signs saying, “Stop white supremacy” and “We’re hitting the streets to protest this racist injustice system”.

In North Carolina, dozens of people gathered on Saturday near the state Capitol building to protest the verdict, the Raleigh News & Observer reported.

Speakers led the crowd of about 75 people in chants of “No justice, no peace!” and “Abolish the police!”

Police officers on motorcycle accompanied the protesters and blocked traffic for them as they marched down a street past bars and restaurants.

After the murder of George Floyd last year by police in Minneapolis, there were ongoing and often violent protests in Portland.

‘An outlet to express ourselves’: How skaters are shredding those ugly stereotypes
Disney World backs down on banning the unvaccinated
Today's Stories

Anger takes to the streets across the US after Rittenhouse acquittal