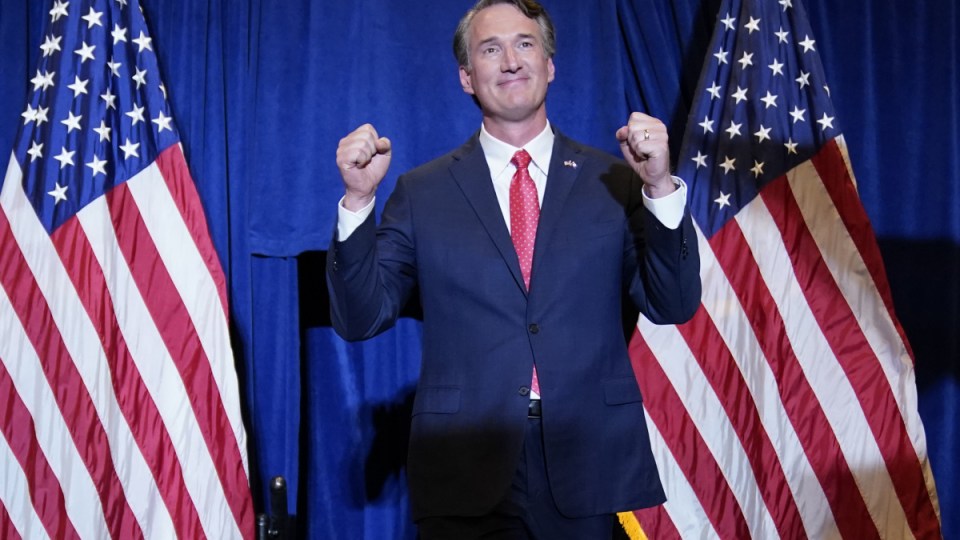 Republican Glenn Youngkin has been declared Virginia's next governor, in a blow to the Democrats. Photo: AAP

Republican Glenn Youngkin has won the Virginia governor’s race to unite former president Donald Trump’s supporters with enough suburban voters to become the first Republican to win office in the US state in 12 years.

The 54-year-old Youngkin’s defeat of Democrat Terry McAuliffe marks a sharp turnabout in a state that has shifted to the left over the past decade and was captured by President Joe Biden last year by a 10-point margin.

Wednesday’s result is certain to add to the Democrats’ anxiety about their grip on political power heading into next year’s midterms when the party’s thin majority in the US Congress could be erased.

“Together we will change the trajectory of this commonwealth,” Mr Youngkin told cheering supporters in a hotel ballroom in Chantilly, west of Washington.

AC/DC’s Thunderstruck blared from speakers as the race was called around 12.45 am local time.

In addition to the stinging loss for the Democrats in Virginia, New Jersey Governor Phil Murphy was in a close fight as he sought to become the first Democratic governor to win re-election there in more than four decades.

The elections were the first major tests of voter sentiment since President Biden took office, and the results were a stern warning sign for the president’s own support.

His administration has been shaken repeatedly in recent months, beginning with the chaotic withdrawal from Afghanistan, challenges in emerging from the pandemic and a legislative agenda at risk of stalling on Capitol Hill.

Mr Youngkin, a political neophyte and former private equity executive, was able to take advantage of apparent apathy among core Democratic voters fatigued by years of elections that were seen as must-wins.

Perhaps most significantly, Mr Youngkin prevailed in a task that has stumped scores of Republicans before him: attracting Trump’s base while also appealing to suburban voters who were repelled by the former president’s divisive behaviour.

Who is Peter Dutton? The ex-cop tipped to be the next leader of the Liberal Party
US gun control advocacy group sues NRA for ‘unlawful’ campaign donations
Today's Stories