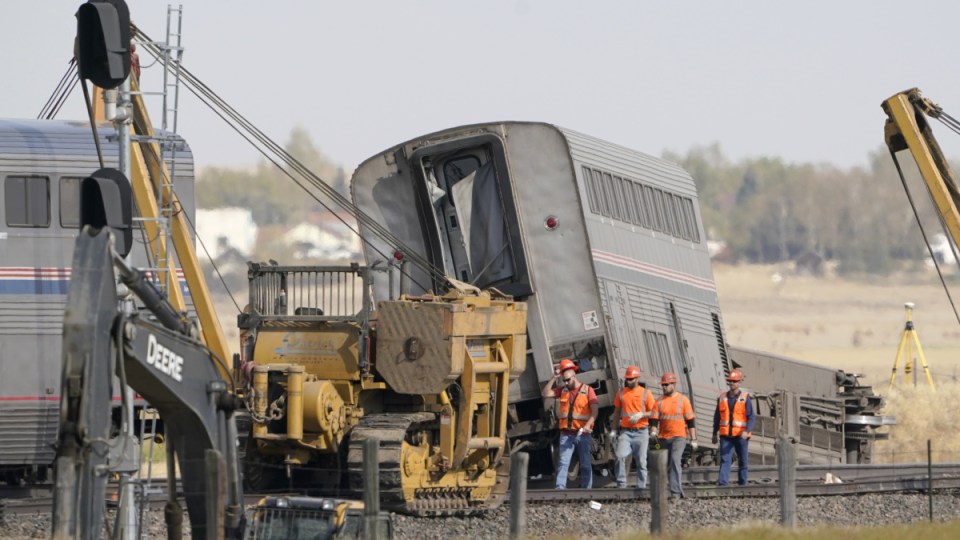 Investigators are onsite and recovery work underway following a deadly train derailment in the US. Photo: AAP

A team of investigators has arrived at the site of a train derailment in north-central Montana that killed three people and left seven hospitalised.

The westbound Empire Builder was en route to Seattle from Chicago with two locomotives and 10 carriages when it left the tracks at about 4pm on Saturday (local time) near Joplin, a town of 200 people some 50 kilometres from the Canadian border.

The train was carrying about 141 passengers and 16 crew when eight of the carriages derailed, Jason Abrams, a spokesman for train operator Amtrak, said.

A 14-member team from from the National Transportation Safety Board, including investigators and specialists in railroad signals, will look into the cause of the derailment, which involved no other trains or equipment said NTSB spokesman Eric Weiss.

Amtrak CEO Bill Flynn expressed condolences to the victims and said the company is working with the NTSB, Federal Railroad Administration and local law enforcement, sharing their “sense of urgency” to determine what happened.

“The NTSB will identify the cause or causes of this accident, and Amtrak commits to taking appropriate actions to prevent a similar accident in the future,” Mr Flynn said.

Most of those on the train were treated for their injuries and released. Five who were more seriously hurt remain at the Benefis Health System hospital in Great Falls, Montana, said Sarah Robbin, Liberty County emergency services co-ordinator.

Two remain in intensive care, another spokeswoman said, while another two are at Logan Health, a hospital in Kalispell, Montana.

There are not believed to be any Australians among the passengers.

Chester councilwoman Rachel Ghekiere said she and others helped about 50 to 60 passengers who were brought to a school.

“They appeared to be tired, shaken, but happy that they were where they were,” she said.

Photos on social media showed carriages on their side and passengers standing alongside the tracks, some carrying luggage. The images showed sunny skies, and it appeared the accident occurred along a straight section of tracks.

“I would be surprised if this was a human-factor derailment,” he said.

Bob Chipkevich, who oversaw railroad crash investigations for several years at the NTSB, said the agency would not rule out any potential cause.

“There are still human performance issues examined by NTSB to be sure that people doing the work are qualified and rested and doing it properly,” Mr Chipkevich said.

Track conditions have historically been a significant cause of train accidents, Mr Chipkevich said.