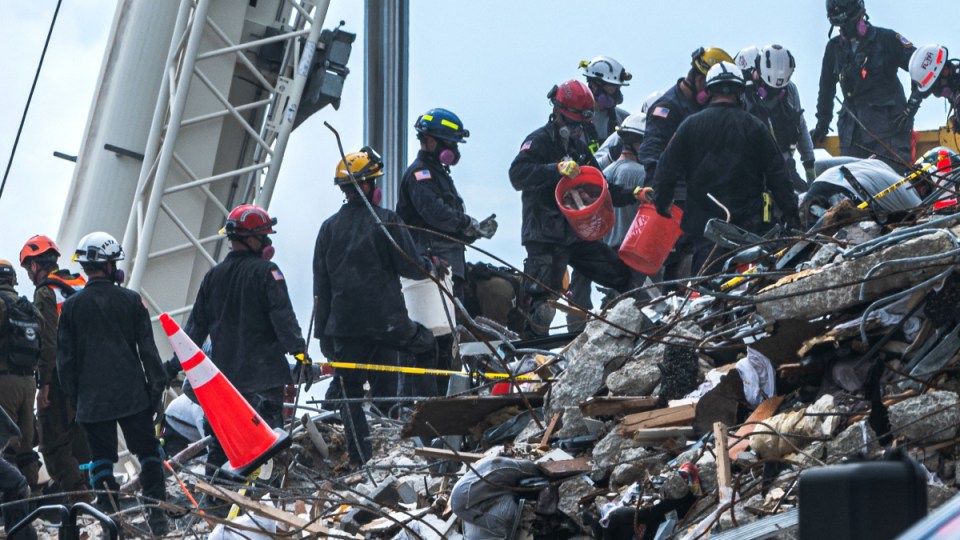 The rescue effort among the rubble of the downed apartment tower has officially ended. Photo: Getty

Remains of the last person still listed as missing in the collapse of a Florida condominium tower on June 24 have been recovered and identified, bringing the final confirmed death toll to 98.

The Miami-Dade fire department’s round-the-clock search for additional victims at the beachfront site of the Champlain Towers South condo, in the Miami suburb of Surfside, was demobilised on Friday.

Miami-Dade County Mayor Daniella Levine Cava called the combined search-and-rescue operation and efforts to find and identify victims of the Surfside disaster “the largest non-hurricane emergency response in the history of our state”.

“Today I can report, because of the sustained heroic efforts, the last remaining missing person has now been accounted for and identified and the family notified,” the mayor said on Monday (local time).

“Through these tireless efforts we were able to at least bring closure to all those who reported missing loved ones.”

The confirmed death toll consists of the 97 victims killed outright when the building crumbled in the early hours of June 24 as residents slept, and one victim who died in hospital.

No one had been pulled alive from the mounds of pulverised concrete, splintered lumber and twisted metal since the early hours after the collapse 33 days ago, and authorities formally gave up hope of finding any more survivors on July 7.

Although the remains of everyone who was believed to have been trapped in the rubble have since been found, police will continue to sift through the debris for additional remains of those who died and for personal effects to return to loved ones, Ms Levine Cava said.

The search for belongings was continuing through debris left when half of the building caved in on itself, as well as through rubble from the portion of the high-rise initially left standing but later demolished, Miami-Dade Police Department director Alfred Ramirez said.

Authorities said they were still gathering evidence for investigations into what triggered the collapse.

While the cause remains undetermined, a 2018 engineering report found structural deficiencies that are now the focus of several inquiries, including a grand jury probe.

The disaster has prompted officials across South Florida to study residential buildings for signs of poor construction or structural weaknesses.

Who is Peter Dutton? The ex-cop tipped to be the next leader of the Liberal Party
Foreign ministers condemn mass arrests in Cuba
Today's Stories