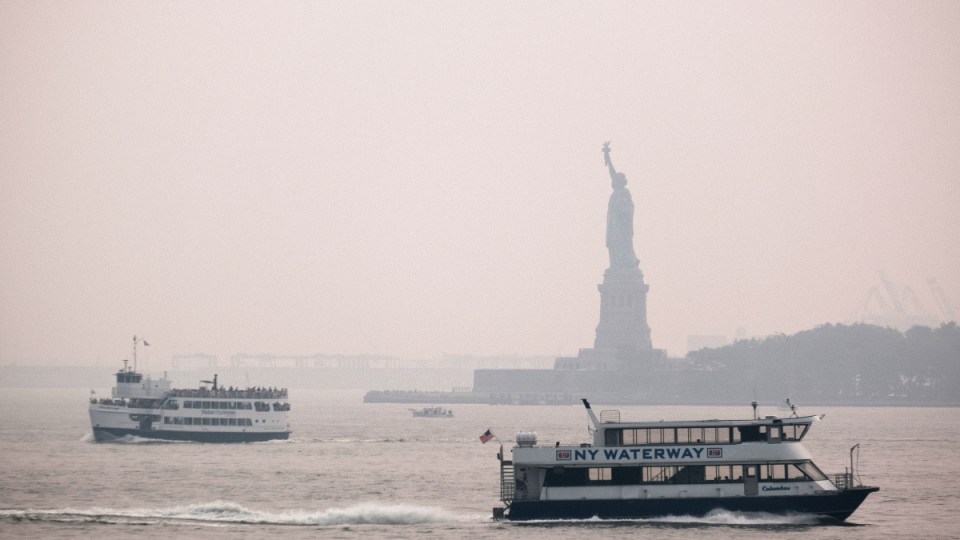 The Statue of Liberty is shrouded in smoke from fires in the US west. Photo: Getty

Smoke and ash from massive wildfires in the American west has clouded the sky on parts of the east coast as the effects of the blazes were felt 4000 kilometres away.

Strong winds blew smoke east from California, Oregon, Montana and other states all the way to other side of the continent on Wednesday (local time).

The nation’s largest wildfire, Oregon’s Bootleg Fire, has grown to cover 1600 square kilometres. Fires also burned on both sides of California’s Sierra Nevada and in Washington state and other areas of the West.

The smoke blowing to the east coast was reminiscent of last autumn, when large blazes burning in Oregon’s worst wildfire season in recent memory choked the local sky with pea-soup smoke but also affected air quality several thousand kilometres away. So far in 2021, Seattle and Portland have largely been spared the foul air.

People in parts of New Jersey, Pennsylvania and elsewhere with heart disease, asthma and other health issues were told to avoid the outdoors. Air quality alerts for parts of the region were in place through Thursday.

The Tamarack Fire, started by lightning in Alpine County, California, has burned more than 170 square kilometres. More than 1200 firefighters are battling the blaze, which has destroyed at least 10 structures.

The Oregon fire has ravaged the sparsely populated southern part of the state and has been expanding by up to six kilometres a day, pushed by gusting winds and critically dry weather that’s turned trees and undergrowth into a tinderbox.

Fire crews have had to retreat from the flames for 10 consecutive days as fireballs jump from treetop to treetop, trees explode, embers fly ahead of the fire to start new blazes and, in some cases, the inferno’s heat creates its own weather of shifting winds and dry lightning.

Monstrous clouds of smoke and ash have risen up to 10km into the sky and are visible for more than 160km.

The blaze, which is being fought by more than 2200 people, is about one-third contained. It was within a few hundred acres of becoming Oregon’s third-largest wildfire in modern history.

At least 2000 homes have been evacuated at some point during the fire and an additional 5000 threatened. At least 70 homes and more than 100 outbuildings have burned, but no one is known to have died.