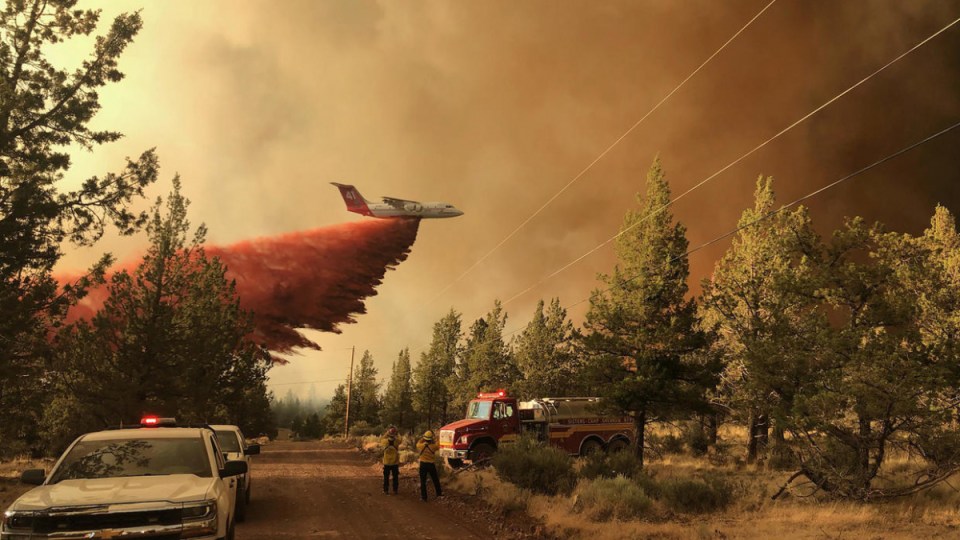 Fire retardant is dropped on another Oregon blaze, the Grandview, which has covered more than 2500 hectares. Photo: Getty

Stoked by hot, dry winds, the largest of several dozen wildfires in the western US has roared through more drought-parched brush and timber in southern Oregon, displacing about 2000 residents after destroying scores of homes.

An army of nearly 2200 firefighters battling the so-called Bootleg fire increased their containment lines on Monday (local time) to 25 per cent of its perimeter, up from 22 per cent a day earlier, Oregon Department of Forestry spokesman Marcus Kauffman said.

“We are fighting the fire aggressively, and there are active efforts to build a containment line, both direct and indirect, wherever it is safe to do so,” Mr Kauffman said.

On Sunday, extreme fire behaviour forced some ground crews to fall back to “safety zones” for a ninth straight day and regroup, incident commander Joe Hessel said, adding “we are looking at sustained battle for the foreseeable future”.

Since erupting on July 6, the blaze has charred more than 123,000 hectares in and around the Fremont-Winema National Forest. Only three other Oregon wildfires in the past century have consumed more land.

The Bootleg also stood as the biggest, by far, of 80 major active wildfires that have collectively burned nearly 486,000 hectares in 13 states, according to the National Interagency Fire Centre.

The spate of conflagrations has coincided with record-shattering heat that has baked much of the region in recent weeks and is blamed for hundreds of deaths.

Scientists have said the growing frequency and intensity of wildfires are largely attributable to prolonged drought and increasing bouts of excessive heat that are symptomatic of climate change.

Since starting nearly two weeks ago, the Bootleg fire has thrived due to gusty winds, high temperatures and low humidity, which are expected to persist in coming days.

Forecasters say there is also a chance of thunderstorms.

The fire had destroyed 67 homes and was threatening almost 2500 more. More than 100 outbuildings and other structures also have been lost. An estimated 2100 people were under evacuation orders on Monday and many more were ready to flee at a moment’s notice.

The cause of the Bootleg is under investigation.

In California, PG&E Corp, the state’s largest power company, said some of its equipment may have been involved in sparking the Dixie fire last Tuesday in a remote area north of Sacramento. The blaze has burned more than 12,000 hectares.