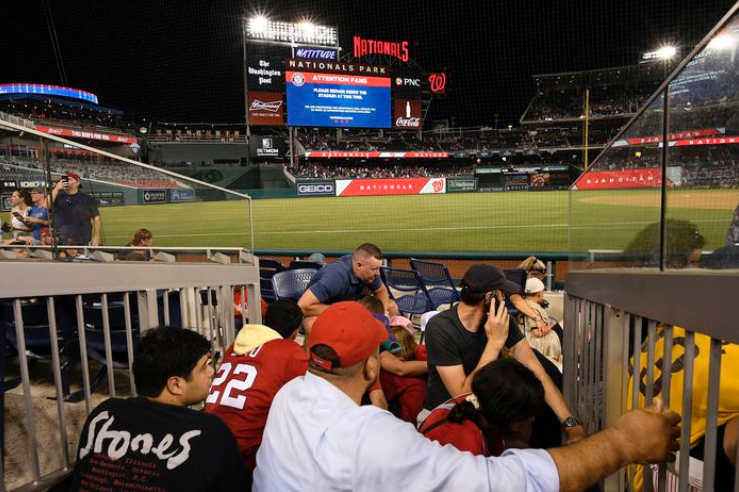 Terrified fans huddle between the seats during the incident at Nationals Stadium. Photo: AP

It was not clear to fans initially if the shooting was inside the complex.

Videos of the incident shared on social media showed some fans crowding into the third-base dugout.

The District of Columbia’s Metropolitan Police Department had earlier said on Twitter that two people where shot outside of the ballpark.

It later followed-up with a tweet that “two additional victims associated with the incident walked into area hospitals for treatment of gunshot wounds”.

DC Police said the shooting appeared to be an isolated incident, stressing that there no ongoing threat. More than two dozen first-responder vehicles were spotted at the scene outside the park, per the Associated Press.

The game between the hometown Nationals and the San Diego Padres was suspended. It is expected to resume on Monday (AEST), followed by the regularly scheduled game.

Planning a holiday? What’s the COVID situation in Bali, Fiji, NZ and the UK?
‘If I was going to do a coup’: Trump goes viral – again
Today's Stories

Fans run for cover from shots at baseball stadium