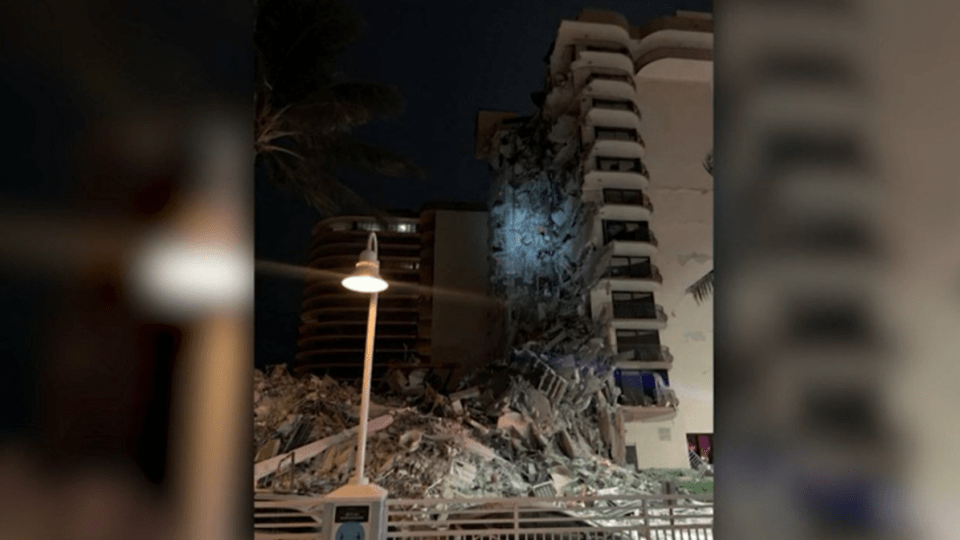 With all hope gone of finding survivors, what remains of the tower is set for demolition. Photo: Erin Miller/Twitter

Rescuers have suspended their search in the rubble of a collapsed Florida apartment building to allow crews to start preparing the unstable remainder of the structure for demolition as a tropical storm approaches.

The search for bodies was halted on Saturday afternoon as workers began boring holes to hold explosives in the concrete of the still-standing portion of the Champlain Towers South tower in Surfside, near Miami Beach.

Miami-Dade Assistant Fire Chief Raide Jadallah told relatives awaiting word on missing loved ones that the suspension was a necessary safety measure because the drilling could cause the structure to fail.

If that were to happen, he told the closed-door briefing, “it’s just going to collapse without warning”.

But in video that one of the relatives livestreamed on social media, one of them was heard calling it “devastating” that the search was on pause.

She asked whether rescuers could at least work the perimeter of the site so as not “to stop the operation for so many painful hours”.

Also on Saturday, the confirmed death toll from the partial collapse of the 12-storey building rose to 24 with the discovery of two more bodies. The number of missing or feared dead dropped to 121 as operations continued into a 10th day.

Concerns had been mounting in the past week that the damaged structure was at risk of failure, endangering the crews below.

The search in adjacent areas of the collapse site was curtailed and shifts detected by monitors early on Thursday prompted a 15-hour suspension of the entire effort until engineers determined it was safe to resume.

Jadallah said the building would not come down until Monday at the earliest, based on how many holes the demolition team needed to drill.

With Tropical Storm Elsa looming in the Caribbean and forecast to move toward the state in the coming days, Florida Governor Ron DeSantis said demolishing the “tottering” and “structurally unsound” structure was the prudent thing to do.

“If the building is taken down, this will protect our search-and-rescue teams because we don’t know when it could fall over,” DeSantis said at a news conference.

“And, of course, with these gusts, potentially that would create a really severe hazard.”

Jadallah said once the structure was demolished, the remnants would be removed to give rescuers access to parts of the garage area, which could give a clearer picture of voids that may exist in the rubble and could possibly harbour survivors.

No one has been rescued alive since the first hours after the June 24 collapse.

Miami-Dade Mayor Daniella Levine Cava said officials would resume the search and rescue on any sections of the pile that were “safe to access as soon as we are cleared”.