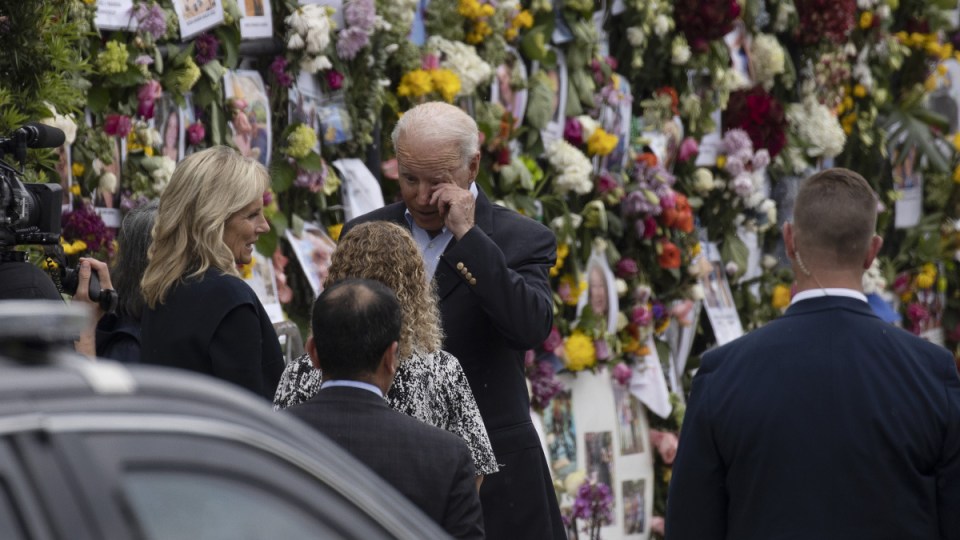 Joe Biden and wife Jill visited the memorial to those missing in the fallen apartment tower. Photo: Getty

US President Joe Biden has pledged federal assistance and offered comfort to the families of those killed and missing in last week’s Florida condominium collapse.

Mr Biden and wife Jill visited the site of the Miami tragedy on Friday (Australian time) as the search-and-rescue operation was temporarily suspended due to concerns about the stability of the remaining structure.

Mr Biden, whose personal experience with tragedy has marked his political career, travelled to Florida a week after the 12-storey Champlain Towers South partially caved in as residents slept.

The confirmed death toll remained at 18 after the discovery of six more bodies in the ruins of the condo, including two children, aged four and 10. Another 145 people remain missing, feared trapped in the rubble.

Mr Biden acknowledged that hopes of finding any survivors dimmed with each passing day but said it was possible someone might still be pulled out alive.

“The whole nation is mourning with these families. They see it every day on television, they’re going through hell,” he said.

“I sat with one woman who lost her husband and her little baby boy and didn’t know what to do.”

Earlier in the day, Mr Biden attended a briefing with local officials, including state Governor Ron DeSantis, who is widely seen as a potential Republican presidential candidate in 2024.

Mr Biden, a Democrat, told them he would deliver “whatever you need” and said he expected the federal government would cover the full costs for the county and state and provide temporary housing for survivors.

Following the briefing, Mr Biden met firefighters and other first responders who have been searching for victims at the site.

Rescue workers at the Miami site were instructed to stop just after 2am on Thursday (local time) when movement in the debris raised concerns that the part of the building still standing could collapse.

“The search-and-rescue operation will continue as soon as it is safe to do so,” Miami-Dade County Mayor Daniella Levine Cava said.

Authorities are adamant they have not given up. But nobody has been pulled alive from the wreckage since the early hours of the disaster in the oceanfront town of Surfside, next to Miami Beach.

“They were searching for a female voice, is what we heard for several hours,” he said.

“Eventually, we didn’t hear her voice any more.”

Officials are also keeping a watchful eye on Tropical Storm Elsa, which has formed over the Atlantic. It could reach south Florida by Monday, potentially further hampering search operations.