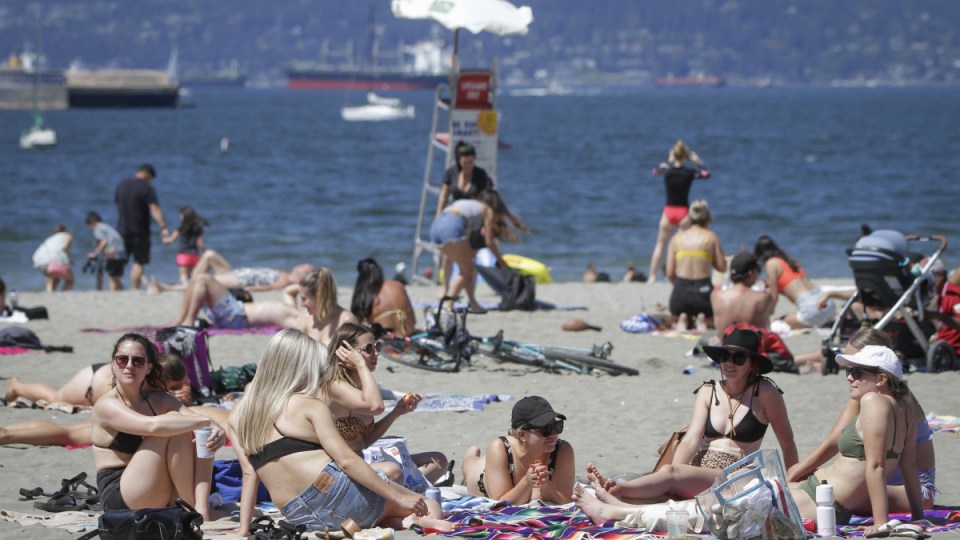 Crowds have flocked to Vancouver beaches as temperatures have risen. Photo: Getty

Dozens of people have died in Canada amid an unprecedented heatwave that has smashed temperature records.

More than 230 deaths have been reported in British Columbia since Friday as a historic heat wave brought record-high temperatures, officials said Tuesday.

The province’s chief coroner called it an “unprecedented time.”

“Since the onset of the heat wave late last week, the BC Coroners Service has experienced a significant increase in deaths reported where it is suspected that extreme heat has been contributory,” Chief Coroner Lisa Lapointe said.

The coroner’s service normally receives about 130 death reports over a four-day period.

Deaths have also spiked in Vancouver. Corporal Mike Kalanj of Burnaby Royal Canadian Mounted Police said his detachment responded to 25 sudden-death calls in the city in a 24-hour period starting on Monday.

The deaths were still under investigation and many of the dead were seniors, he said.

Temperatures in the Vancouver area reached just under 32 degrees on Monday but the humidity made it feel close to 40 degrees in areas that were not near water, Environment Canada said.

The record-breaking heat wave could ease over parts of British Columbia, Yukon and the Northwest Territories by Wednesday (local time), but any reprieve for the Prairie provinces is further off.

“Vancouver has never experienced heat like this, and sadly dozens of people are dying because of it,” Sergeant Steve Addison said.

“Our officers are stretched thin, but we’re still doing everything we can to keep people safe.”

As of mid-afternoon on Tuesday, he said, police had responded to more than 65 sudden deaths since the heat wave began on Friday.

“The vast majority of these cases are related to the heat,” Sergeant Addison said, adding that on a typical day, Vancouver police responded to between three and four sudden-death calls.

Those records include a new Canadian high temperature of 47.9 degrees set in Lytton, British Columbia, smashing the previous record of 46.6 degrees set in the same village a day earlier.

Lytton is about 100 kilometres from the Whistler Blackcomb ski resort and is at a latitude of 50 degrees north — closer to the North Pole than the equator.

Records fall on both sides of border

In the US, Portland, a typically cool, wet city in the Pacific North-West, reached 46.6 degrees on Monday; that’s five degrees above a record that until this heatwave stood for more than 50 years.

Dr Rogers moved from Melbourne to Portland in 2019 to study heatwaves.

This week, she and her colleagues at Washington State University found themselves in the middle of one of the worst heatwaves on record.

“One scientist in particular who’s lived here for a number of years, he said he just never thought these conditions would happen in certain parts of Oregon,” she told the ABC.

“He just never expected temperatures would get that high.”

“Heatwaves like this event are also often worse due to the impact of climate change.

Hundreds of deaths linked to record-breaking heat in Canada