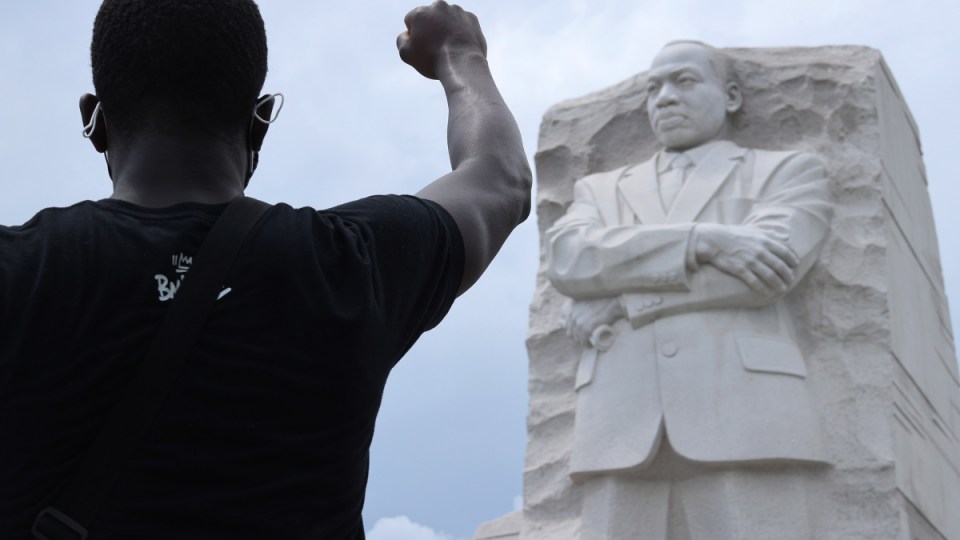 A man kneels and waves his fist at the Martin Luther King Jr memorial in Washington. Photo: Getty

The US will soon have a new federal holiday commemorating the end of slavery in the nation.

The House of Representatives voted 415-14 on Wednesday (local time) to make Juneteenth, or June 19, the 12th federal holiday.

The bill now goes to President Joe Biden’s desk to be signed into law.

Juneteenth commemorates when the last enslaved African Americans learned they were free. Confederate soldiers surrendered in April 1865, but word did not reach the last enslaved black people until June 19, when Union soldiers brought the news of freedom to Galveston, Texas.

That was also about two-and-a-half years after the Emancipation Proclamation freeing slaves in the Southern states.

Also known as Freedom Day or Emancipation Day, it will be the first new federal holiday since Martin Luther King Jr Day was created in 1983.

“Our federal holidays are purposely few in number and recognise the most important milestones,” Democratic representative Carolyn Maloney said.

“I cannot think of a more important milestone to commemorate than the end of slavery in the United States.”

The day is already recognised as a state holiday across most of the US. The push to have it recognised as a national day gathered pace during protests at the high-profile deaths in 2020 of George Floyd, Ahmaud Arbery and Breonna Taylor – all black people who died at the hands of police or armed white citizens.

Ahead of the vote, Texas Democrat senator Sheila Jackson Lee said she saw a “racial divide crumbled, being crushed” under a “momentous vote that brings together people who understand the value of freedom”.

“That is what Juneteenth is all about,” she said.

The Senate passed the bill a day earlier under a unanimous consent agreement that expedites the process for considering legislation.

It takes just one senator’s objection to block such agreements.

US votes for Juneteenth holiday to mark end of slavery