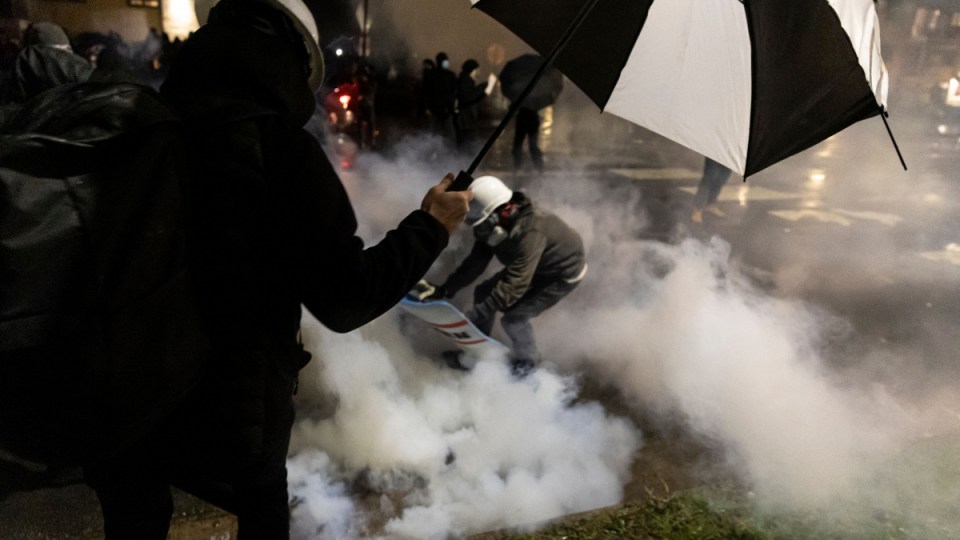 Civil unrest has gripped a Minneapolis suburb for a second night after the fatal police shooting of a young black man appeared to result from an officer mistakenly opening fire with her gun instead of a Taser.

Hundreds of protesters braving a steady downpour and defying a curfew ordered by state Governor Tim Walz clashed with police in riot gear as darkness fell outside police headquarters in Brooklyn Centre on Monday.

Many had arrived from an outdoor vigil for family, friends and supporters of slain motorist, Daunte Wright, 20.

His death on Sunday, after he was stopped for an expired registration, has roiled a region already on edge.

On Monday, medical examiners ruled Mr Wright’s death was a homicide, confirming that he “died of a gunshot wound of the chest”.

Mr Wright was killed just 16 kilometres from the courthouse where former Minneapolis police officer Derek Chauvin is standing trial on murder charges in the arrest last May of George Floyd, a 46-year-old black man.

During Monday’s memorial at the spot where Mr Wright was killed, relatives remembered him as a good-natured father who worked multiple jobs to support his two-year-old son.

They rejected the notion an accidental shooting was to blame.

“My brother lost his life because they were trigger happy,” his older half sibling, Dallas Wright, told the crowd.

“My heart is broken in a thousand pieces … I miss him so much and it’s only been a day,” his mother, Katie Wright, said.

“He was my life, he was my son and I can never get that back. Because of a mistake? Because of an accident?”

Sunday’s shooting immediately sparked a night of skirmishes between police and protesters.

Local media reported looting and burglaries of about 20 businesses.

On Monday, Mr Walz ordered a dusk-to-dawn curfew for the greater Twin Cities area around Minneapolis and St Paul but disturbances flared anew.

A crowd outside police headquarters surged against a makeshift fence, some hurling bottles and other projectiles as police responded with volleys of tear gas and what appeared to be plastic rounds.

“I’m calling and asking for people to go home,” he said on CNN as the turmoil unfolded.

Police Chief Tim Gannon said earlier in the day a routine traffic stop of Mr Wright had escalated into a deadly confrontation when officers ran a check on his expired registration and found an outstanding warrant.

Police video footage presented at the briefing showed an officer trying to handcuff Mr Wright next to the car, before Mr Wright broke free and got back inside his car.

At that point, a second officer yells, “Taser, Taser, Taser”, before firing a single shot from her handgun.

“Holy shit, I just shot him,” the policewoman is heard to shout as the car rolls away with Mr Wright still in the driver’s seat.

The car travelled several blocks before striking another vehicle and stopping.

Mr Gannon said the investigation was in its early stages but the shooting seemed unintentional.

“This appears to me, from what I viewed and the officers’ reaction and distress immediately after, that this was an accidental discharge that resulted in the tragic death of Mr Wright,” he said.

The officer who shot Mr Wright was placed on administrative leave, though Mayor Elliott called for her dismissal.

She was later identified as 26-year veteran Kim Potter.

Hours after the police chief’s briefing, Mr Elliott said the city council had approved a motion to shift control over the police department to his office.

Earlier, the mayor announced the Brooklyn Centre city manager had been fired with immediate effect.

The killing, like several others of black men, originated with the kind of traffic stop civil rights activists say has been used by law enforcement as a form of harassment.