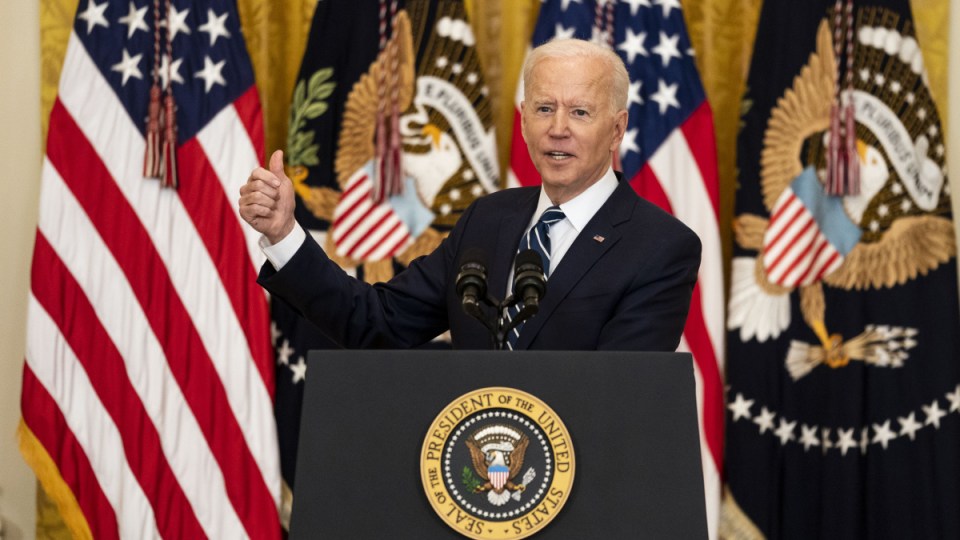 Joe Biden has provided a revealing look into how he views the threat from Beijing. Photo: Doug Mills/NYT

At the end of a winding answer Thursday about competing with China and about his relationship with Xi Jinping, a man he said does not have a democratic “bone in his body,” President Joe Biden offered up a revealing assessment of one of America’s most pressing challenges.

“This is a battle between the utility of democracies in the 21st century and autocracies,” he told reporters at his first news conference as president. “We’ve got to prove democracy works.”

China’s president, Xi, Biden said bluntly, was “a smart, smart guy” who shared with President Vladimir Putin of Russia a belief that “autocracy is the wave of the future and democracy can’t function” in the complexities of the modern world.

Among the biggest tasks of his presidency, Biden seemed to be arguing, is to prove anew to a skeptical world that both American democracy and its model of democratic capitalism still works – and that it is superior to the very different system Xi is ruthlessly enforcing at home as he tries to extend China’s influence around the world.

For a president barely 10 weeks into office, casting the United States as confronting a global struggle with the Chinese model has some clear political benefits. One of the few issues that unites Democrats and Republicans is the need to compete head-on with Beijing. Sen. Dan Sullivan, R-Alaska, said Monday that the Chinese have already taken notice.

“They recognise in many ways that we are now finally awakened to the challenge,” he said this week at the Atlantic Council. “And I would call it a bipartisan awakening.”

Biden’s aides say his view of the Chinese challenge is not solely one of foreign policy. He plans to make full use of the fear of Beijing’s ambitions as he introduces his infrastructure initiative next week.

There will be hundreds of billions of dollars for technologies and projects that the Chinese are also pouring cash into, including semiconductors, artificial intelligence and 5G networks, as well as big breakthroughs in electric cars and synthetic biotechnology.

There is a striking similarity between Biden’s list and Xi’s “Made in China 2025” initiative – which was first announced six years ago as an effort to make China largely independent of Western suppliers for critical technology.

At the core of Biden’s infrastructure and supply-chain initiatives is an effort — parts of which began in the Trump years – to ensure the West is not dependent on Chinese technology. It is a battle that blossomed over Huawei, the maker of next-generation communications networks, but has now spread to fears that Chinese apps like TikTok could be a pathway for attacks on American infrastructure.

“China is out-investing us by a long shot,” Biden said, previewing his argument, “because their plan is to own that future.”

It is a time-tested approach: President Dwight D. Eisenhower used the launch of Sputnik 1, the first artificial satellite, to spur a military and civilian space race, and President John F. Kennedy picked up on the theme in setting the goal for landing a man on the moon.

A decade ago, President Barack Obama used his State of the Union address to call for a “Sputnik moment” of public investment, also using China as a spur, but the effort fell flat.

Yet for all the unanimity around the China challenge, it is far from clear whether Biden’s political strategy will work.

Republicans object to both the huge government spending in the Biden plan and to the overhang of debt it would create. And there seems bound to be a rerun of the arguments, dating to the 1980s, over whether a federal “industrial policy” — where taxpayer dollars are poured directly into technologies in which the United States judges it must stay ahead – that creates a competitive advantage for America makes sense or just squelches the innovations of Silicon Valley.

No matter how that plays out, Biden is casting the United States’ current competition in very different terms than his predecessors did. “Look, I predict to you,” he said, “your children or grandchildren are going to be doing their doctoral thesis on the issue of who succeeded: autocracy or democracy? Because that is what is at stake, not just China.”

Biden was also careful not to make Cold War analogies; in fact, he noted that what was missing now was much of an ideological contest. (“You don’t have Russia talking about communism anymore,” he noted.) He has always said he would cooperate with adversaries, and on Friday he invited Xi and Putin to a virtual climate summit meeting he is hosting in April. He speaks of competition, not containment.

“I see stiff competition with China,” Biden said, over everything from chips to national values, which he added was the key to his two-hour conversation with Xi. And that, he said, meant pushing back on China’s stripping of rights in Hong Kong or on its harsh repression of Muslim minorities.

“The moment a president walks away from that, as the last one did,” he said, taking a dig at former President Donald Trump, “is the moment we begin to lose our legitimacy around the world.”

Still, Biden’s discussion of an open contest between two similarly sized superpowers was a significant change for U.S. presidents.

A quarter-century ago, President Bill Clinton would make the case – oftentimes, during visits to Beijing – that the arrival of the internet would force China to embrace an more American-style democracy. Clearly, that did not work out.

President George W. Bush stressed areas where Chinese and American interests overlapped – counter-terrorism and North Korea were the two he mentioned the most – but never cast China as a technological equal. Obama would always say the United States “welcomes the rise of China” and recognized that it could not contain the country if it wanted to, so it would be foolish to try.

And Trump spent three years imposing tariffs and insisting he would cut the deal of the century with China, and one year castigating it as the exporter of the coronavirus, while his secretary of state at the time, Mike Pompeo, insisted that over time, the Communist Party would collapse.

Now, Biden’s team says it is assembling a strategy built more around competition than containment.