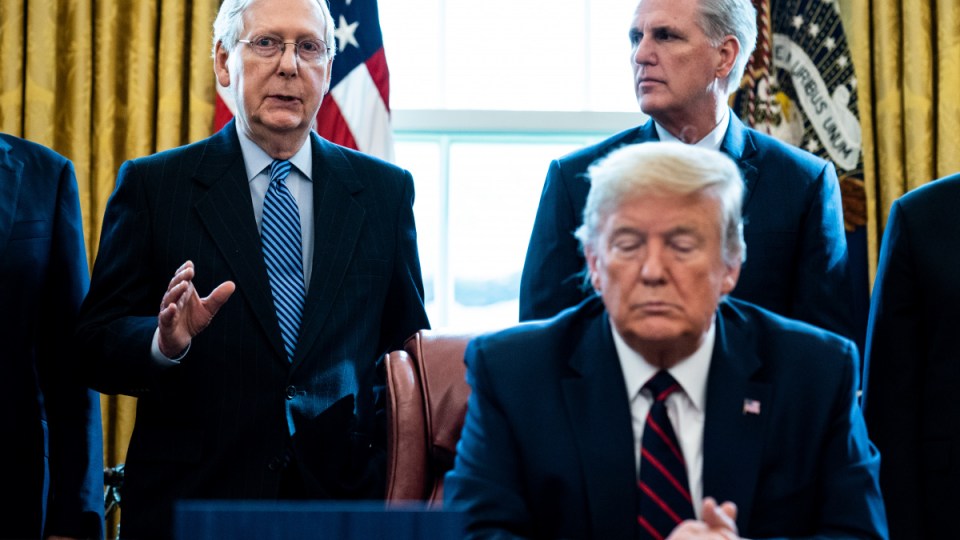 Mr Trump’s broadside came just days after the Kentucky Republican – who was once one of the former president’s closest allies – voted to acquit Mr Trump in his second impeachment trial.

Despite his vote on Saturday (US time), Mr McConnell told the Senate minutes later that Mr Trump was “practically and morally responsible” for the insurrection at the US Capitol on 6 January.

On Tuesday, Mr Trump responded with a brutal statement signalling a growing feud between the two most important voices in the US Republican Party.

“Mitch is a dour, sullen, and unsmiling political hack, and if Republican senators are going to stay with him, they will not win again,” he said in a statement amid the fallout from his second impeachment trial.

“He will never do what needs to be done, or what is right for our country. Where necessary and appropriate, I will back primary rivals who espouse Making America Great Again and our policy of America First. We want brilliant, strong, thoughtful, and compassionate leadership.”

Mr Trump and Mr McConnell parted ways in the weeks after the November 3 presidential election, with Mr Trump irked that Mr McConnell had recognised Democrat Joe Biden as the winner.

The gap between them widened when Mr McConnell made his statement on the Senate floor on Saturday.

As Senate majority leader, Mr McConnell had pushed to delay Mr Trump’s historic second impeachment trial until after Mr Biden’s January 20 inauguration. He then said he voted to acquit Mr Trump because it he believed it was unconstitutional to try a president after they had left the White House.

But he left Americans in no doubt that he believed Mr Trump incited the violent raid on the Capitol building.

After Trump was cleared in a 57-43 vote, Mr McConnell said the rioters had been “fed wild falsehoods by the most powerful man on Earth. Because he was angry he’d lost an election”.

“Former president Trump’s actions that preceded the riot were a disgraceful, disgraceful dereliction of duty,” he said.

“Trump is practically and morally responsible for provoking the events of the day.”

Mr McConnell’s remarks on Saturday sent a clear signal that he believes Republicans must separate their party from Mr Trump to remain competitive in future elections.

He and Mr Trump are trying to push the party in opposite directions: Mr McConnell back toward the roots of a budget-focused, pro-trade party, while Mr Trump – who is still backed by a large portion of the Republican voter base – advocates a more populist approach.