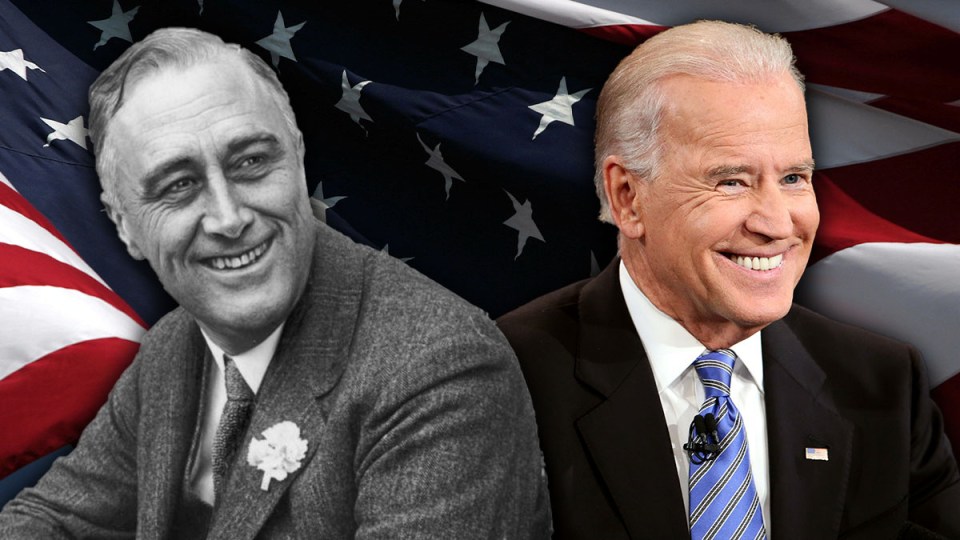 Joe Biden's task ahead is possibly greater than that faced by Franklin Roosevelt but his speech needed to be more rudimental. Photo: Getty/TND
analysis

Joe Biden’s inaugural speech sought nothing less than to refocus America’s vision of itself, readjusting the distortions, delusions and divisions that have clogged our field of vision since Donald Trump spoke from these same Capitol steps four years ago.

There were no grand plans, no detailed checklists of the great initiatives rolled out.

There had been hunches that this address would be akin to Franklin Roosevelt’s grand speech in 1933, during the height of the Great Depression. In that address, FDR spelled out a vision that transformed the idea of government itself, putting federal power to work to solve the greatest economic crisis the country had ever seen.

Americans have been fighting about FDR’s approach ever since.

Biden faces tasks no less daunting, with the pandemic raging and the economy sputtering.

He has indicated that he plans to pursue an activist agenda, and is expected to issue dozens of executive orders for a host of issues as early as today.

But as he stood on the same Capitol steps that thugs surged across two weeks ago, Biden’s task was more remedial – to remind Americans about their shared values, US democracy’s historical strength and the need to think less about what separates Americans than what divides them.

“There is much to repair, much to restore,” he said. His speech made no mention of his predecessor, but it was a survey of the wreckage Trump had wrought.

That a new president had to extol the virtues of facts, for example, is something none of presidents before him saw the need to do.

It was classic Biden: Earnest and homey, enthusiastic and profoundly optimistic.

If Donald Trump in many ways resembled the evil Mr Potter in It’s a Wonderful Life Joe Biden is George Bailey – pleading with his building and loan customers to stick it out, stay strong, and see tough times through together.

It’s all a bit shambolic and patched up, but it works.

“Hear me out,” he said at one moment. “Take the measure of me and my heart.”

“I will always level with you,” he said at another. “My whole soul is in it.”

In many ways, the speech was a return to the political rhetoric Americans are used to.

That it seems so refreshing, if not remarkable, is an indictment about how bleak our political conversation under Trump had become.

Biden quoted St Augustine’s definition of a people as defined by “the common objects of their love.” Can anyone imagine something like that from Donald Trump?

But the speech was not just a playlist of windswept bromides about unity. Biden stressed the difficulties ahead, and spoke plainly about the divisions that split the country. And he drew a distinction between political disagreement and political warfare.

He framed the former as a fundamental part of American life, indeed seeming to relish the thrust and parry he’s been part of in the US senate for nearly 50 years.

But he called upon Americans to “open their souls” and end “this uncivil war” that threatens to consume the country.

And he maintained that before America can tackle the challenges it faces, it must stand together to acknowledge those challenges and to agree that solving them is to benefit of everyone.

Despite his experience, much of Biden’s speech leaned on a hope for comity that just seems like an illusion.

The divisions that govern American politics, though aggravated under Trump and now infecting the body politic, have been growing for years.

It doesn’t take a pessimist to think that what occurred January 6 is not the last sign of those disagreements. This isn’t a movie, and even Jimmy Stewart might have a hard time getting now-minority Senate Leader Mitch McConnell on side.

But Biden’s message wasn’t aimed at the political class. It was to the American people.

Judge me not as Democrat, the new president implied, but as someone who will tell you the truth straight, who believes in being a leader for all Americans, and who has real faith in the notion that together we can lick our problems.

The hope that kind of speech generates might be short-lived. But after the four years America just lived through, it was a pleasant sound for sore ears.