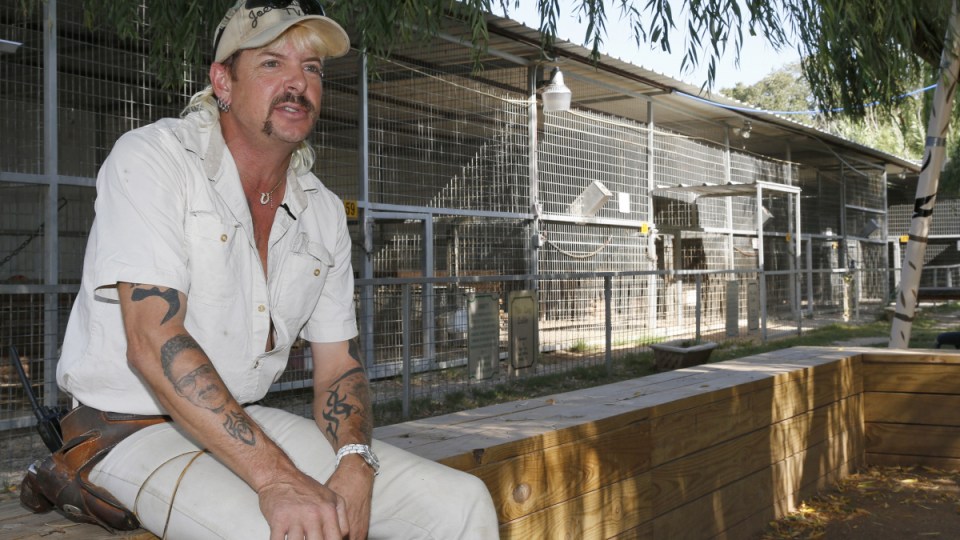 The Netflix star made his announcement from prison. Photo: AP

In a statement released on Wednesday afternoon, Australian time, outgoing US President Donald Trump granted pardons to 73 individuals and also commuted the sentences of an additional 70 individuals.

Bannon, who was described in the release as ‘‘an important leader in the conservative movement and is known for his political acumen’’, was reportedly granted clemency after being charged with fraud over raising funds for the Mexico border wall.

Lil Wayne, whose real name is Dwayne Michael Carter Jr, was awarded a full pardon after pleading guilty to possession of a firearm and ammunition by a convicted felon, owing to a conviction more than a decade ago.

WikiLeaks founder Julian Assange also did not make the list.

Mr Trump has embarked on somewhat of a pardoning spree in the lead-up to Joe Biden’s inauguration, wildly wielding his power to grant clemency before it is stripped from him on Wednesday at midday (Washington time).

Joseph Maldonado-Passage, known as Joe Exotic, was convicted on animal abuse charges and for attempting to hire a hit on his arch nemesis, Carole Baskin.

And they are certainly prepared for the honour, hiring a stretch limousine to take Exotic home from the prison where he is currently serving a 22-year sentence.

Exotic was launched to fame after starring in a documentary series about his life as an exotic animal owner on his farm in Oklahoma.

The I-can’t-believe-this-is-real-life exploits of Exotic and co captured the awe of millions when it hit Netflix streaming early in 2020.

With much of the world forced to stay home during the coronavirus pandemic, the outlandish Tiger King was the must-watch series of the first lockdown.

Exotic’s loyal fanbase have now taken to Twitter on his behalf, posting a message of hope and a promise to “help many children fix their faces”.

He also claimed, “God will be proud.”

Meanwhile in the state of Oklahoma, a federal judge has ordered the new owners of Exotic’s zoo to turn over the lion and tiger cubs in their possession, along with the animals’ mothers, to the government.

Acting Assistant Attorney-General of the Justice Department’s Environment and Natural Resources Division Jonathan D Brightbill said the Lowe’s had shown “shocking disregard for both the health and welfare of their animals, as well as the law”.

The repossession of Exotic’s beloved animals on the possible eve of a presidential pardon could make for a dramatic plot twist in Universal Studios’ scripted adaptation of the series – titled Joe Exotic – which is set to be filmed in Australia.

At the top of the expected clemency list is former White House aide Steve Bannon, according to the New York Times.

The former White House chief strategist, who was a key adviser in Trump’s 2016 presidential run, was charged last year with swindling Trump supporters over an effort to raise private funds to build the president’s wall on the US-Mexico border.

White House officials had advised Trump against pardoning Bannon, who has pleaded not guilty.

Also rumoured to be on the President’s radar is rapper Lil Wayne (real name Dwayne Carter), while WikiLeaks founder Julian Assange is no longer expected to have made the final cut.

The list of pardons being workshopped by the lame duck President is making many Americans nervous, with best-selling author Don Winslow tweeting: “The pardons are right around the corner and if what I am hearing is correct it is a long and terrible list of truly terrible people.”

While there has been some speculation that Mr Trump could potentially pardon himself and members of his family – he has no plan to do so at this stage, according to a source.

White House advisers said Mr Trump has privately debated with advisers whether to take the extraordinary step of issuing a pardon for himself but some administration officials have cautioned against a self-pardon because it would make him look guilty.

Last week, Mr Trump became the first President in US history to be impeached twice, after being impeached on charges of inciting the storming of the US Capitol by pro-Trump protesters on January 6.

The insurrection at the Capitol building resulted in five deaths, including one police officer.

Mr Trump’s case is set to face a Senate trial and if convicted, he could be disqualified from seeking another run for the presidency in 2024.

A source, speaking on condition of anonymity, said so far Mr Trump does not plan to pardon himself and also does not plan to issue pre-emptive pardons for members of his family, another subject he has discussed privately with advisers.

Mr Trump, who has already issued two waves of pardons in the past month, met advisers on Sunday to finalise a list of more than 100 pardons and commutations, the source said.

The source said the clemencies were expected to be issued on Mr Trump’s last full day in office on Tuesday (Washington time).