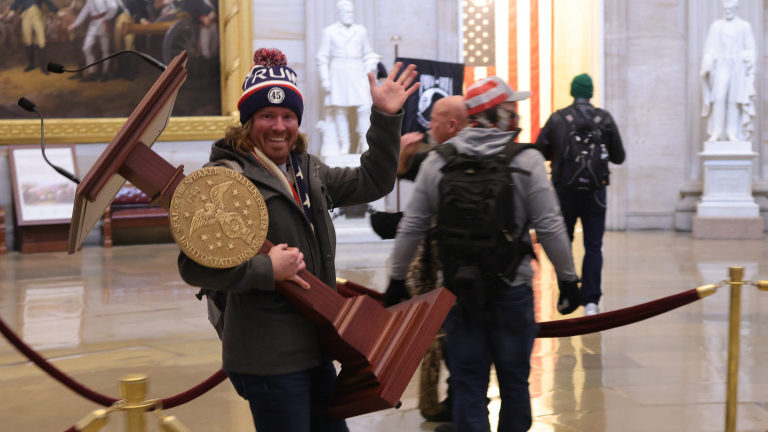 The FBI says it is examining thousands of images and digital records from last week's Capitol violence. Photo: Getty

The FBI says it expects to charge hundreds of people over last week’s Capitol riots, as investigators sift through more than 100,000 pieces of digital evidence.

The US Justice Department has already opened criminal investigations on more than 170 individuals for their involvement in the riot by President Donald Trump’s supporters.

People will be charged with assault and seditious conspiracy, the top federal prosecutor in Washington, DC said on Tuesday (local time).

“I think the scope and scale of this investigation and these cases are really unprecedented, not only in FBI history but probably DOJ history,” Acting US Attorney Michael Sherwin said.

“The Capitol grounds outside and inside are … a crime scene.”

Many of them involve people whose photos went viral on social media, such as one of a man pictured sitting at the desk of a staffer of House Speaker Nancy Pelosi. But Mr Sherwin said more serious charges were coming and a grand jury had been reviewing the cases.

“We’re looking at significant felony cases tied to sedition and conspiracy,” Mr Sherwin said, noting his office had launched a strike force whose marching orders were to build criminal cases around such charges.

He said other strike forces were focusing on assaults on law enforcement and members of the media.

“The range of criminal conduct is really … unmatched in any type of scenario that we’ve seen,” Mr Sherwin said, noting it ran the gamut from “simple trespass” and “theft of mail” to “felony murder and even civil rights excessive force”.

Steven D’Antuono, the assistant director in charge for the FBI’s Washington, DC office, said the bureau has examining more than 100,000 photos, video and other tips it has received since last week.

In the six days since the attack, more than 150 case files had been opened, he said – and that was “just the tip of the iceberg”.

He also warned those who participated in last week’s attack should expect a knock at their door from the FBI, even if they had since left Washington DC.

The FBI has also been releasing photos of suspects and seeking help from the public. Recently, it released images of someone who is suspected of planting pipe bombs at the headquarters of the Democratic and Republican national committees.

On Tuesday, Senator Bill Cassidy, a Republican from Louisiana, tweeted photos he said he had received from Capitol Police. He said the man pictured was wanted for questioning in connection with the murder of Capitol Police officer Brian Sicknick.

The photos have since been deleted.

Mr D’Antuono declined to comment on whether the man in the photo was in fact a suspect.

Also on Tuesday, the US military’s top leaders issued a memo to forces decrying the Capitol Hill riot, which they called a direct assault on the constitutional process.

In a rare message to service members, the Joint Chiefs of Staff – the uniformed leaders of the military branches – said the violent riots were an assault on America’s constitutional process and against the law.

The joint message broke nearly a week of silence by the military leaders after the assault on the Capitol by supporters of Mr Trump sent lawmakers into hiding and left five people dead.

While several of Mr Trump’s cabinet members, including acting Defence Secretary Chris Miller, have condemned the storming, the top US general, Chairman of the Joint Chiefs of Staff General Mark Milley, had remained silent. That changed late on Tuesday.

“The violent riot in Washington, DC on January 6, 2021 was a direct assault on the US Congress, the Capitol building, and our Constitutional process,” the seven generals and one admiral said in an internal memo to troops, adding the military remained committed to protecting and defending the Constitution.

“The rights of freedom of speech and assembly do not give anyone the right to resort to violence, sedition and insurrection.”

The military leaders said President-elect Joe Biden would be inaugurated on January 20 and become their commander in chief.

“Any act to disrupt the constitutional process is not only against our traditions, values, and oath; it is against the law.”

US officials said General Milley had not commented on last week’s events because he wanted to stay out of politics.

The silence was in sharp contrast with June, when General Milley made a controversial walk to a church with Mr Trump after law enforcement officers backed by National Guard troops used tear-inducing chemicals and rubber bullets to clear the area of peaceful protesters.

‘Tip of the iceberg’: Hundreds of people to face charges over US riot