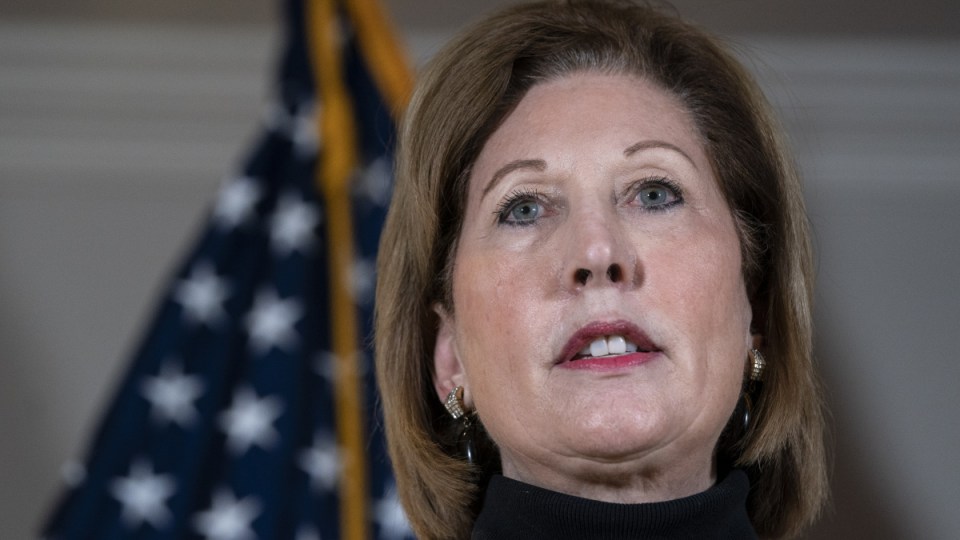 Attorney Sidney Powell speaks to the press about various lawsuits related to the 2020 election, on November 19. Photo: Getty

There has been no shortage of drama since Donald Trump won the 2016 election, so it should come as no surprise that losing the 2020 one has not provided a dull moment either.

In the latest instalment of post-election fallout, President Trump’s campaign has attempted to distance itself from Sidney Powell, a lawyer who made baseless allegations of voter fraud at a campaign news conference on Thursday.

“Sidney Powell is practising law on her own,” Trump campaign lawyers Rudy Giuliani and Jenna Ellis said in a statement on Sunday.

“She is not a member of the Trump legal team. She is also not a lawyer for the president in his personal capacity.”

The announcement came a day after a judge dismissed the campaign’s lawsuit seeking to halt President-elect Joe Biden’s victory in Pennsylvania, dealing a major blow to Mr Trump’s flailing efforts to overturn his November 3 election loss.

Twitter users have been quick to point out Mr Trump had referred to Ms Powell as one of his lawyers as recently as November 14, in this tweet:

It is one of the few tweets on Mr Trump’s account that has not been flagged by the platform for containing misinformation.

Democrats and some Republicans have accused Mr Trump of trying to undermine faith in the American electoral system by promoting false claims of widespread voter fraud.

Ms Powell drew criticism and ridicule last week when she claimed – without providing evidence – that electronic voting systems had switched millions of ballots in favour of Mr Biden.

This unfounded claim has been one of a host of party favourites among Mr Trump’s legal team and followers after he lost the US presidential election.

Ms Powell had also made other dramatic claims without evidence, saying she had a voter fraud case of “biblical” proportions in Georgia.

Some online critics have pointed out the hypocrisy of denying Ms Powell’s involvement in the legal battle to refute the election outcome, which is led by Rudy Giuliani.

Mr Giuliani has been made a laughing stock in recent weeks, after accidentally hosting a press conference outside a garden maintenance shop, and last week sweating hair dye while repeating baseless claims that the election had been rigged.

“Yet another Rudy Giuliani spectacle exposes, as his appearances always do, the absurdity of Donald Trump’s thoroughly discredited claims of voter fraud,” he said within hours of the bizarre announcement on Thursday.

“Numerous courts, election officials from both parties, and even officials within Trump’s own administration, have all reaffirmed that claims of widespread voter fraud are categorically false.”

It will be a small affair, in light of the coronavirus pandemic.

Mr Biden is due to take office on January 20 and has already started working with experts to form a task force against the coronavirus pandemic which has gripped the United States.

The US has recorded more than 11 million coronavirus cases since the pandemic began.

Meanwhile, instead of attending the G20 summit’s “Pandemic Preparedness” event at the weekend, Mr Trump decided to play a round of golf.

He later zoomed in to tell world leaders that the Paris Agreement was designed to cripple the American economy, not to save the planet, and said he looked forward to working with them “for a long time” – apparently blissfully unaware that he only has two months left in office.