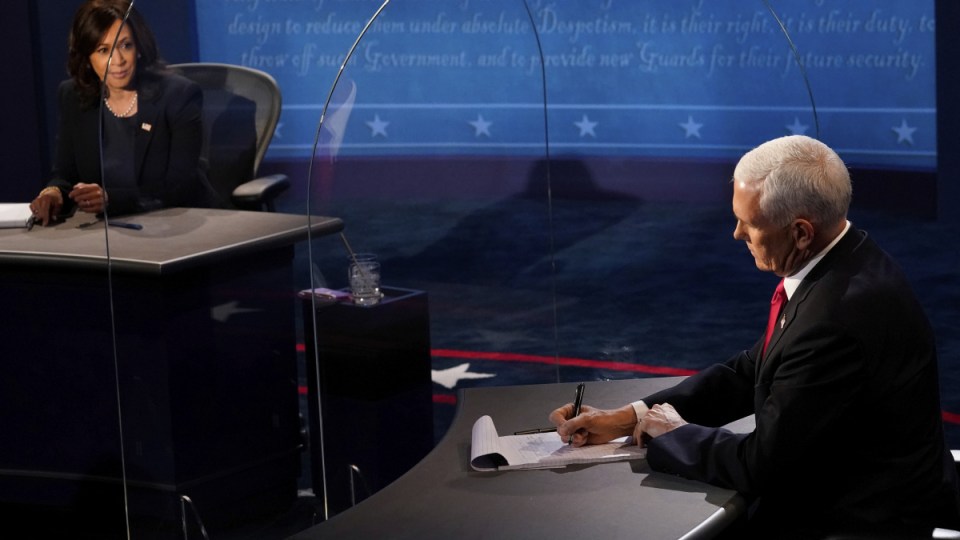 Democratic challenger Kamala Harris has blasted the Trump administration’s “incompetent” response to COVID-19 at the vice presidential debate, labelling it the “greatest failure” of any administration.

“The American people have witnessed what is the greatest failure of any presidential administration in the history of our country,” Ms Harris said on Wednesday (local time) as the debate began.

In response, Mr Pence defended the US administration’s efforts to battle the disease, pointing to Mr Trump’s decision in late January to restrict travel from the pandemic’s epicentre in China.

“I want the American people to know that from the very first day President Donald Trump has put the health of America first,” he said.

Mr Pence offered praise for the American people, arguing that Ms Harris was discounting the sacrifices they had made.

“The American people have had to sacrifice far too much because of the incompetence of this administration,” Ms Harris retorted.

The outbreak has killed more than 210,000 Americans and ravaged the US economy.

“They knew and they covered it up,” she said.

“They minimised the seriousness of it. They still don’t have a plan.”

Mr Pence accused Ms Harris of undermining public confidence in a vaccine, which he said would be ready by the end of the year.

“President Trump and I trust the American people to make the best choices in the interests of their health,” Mr Pence said.

“Joe Biden and Kamala Harris consistently talk about mandates. We’re about freedom and respecting the freedom of the American people.”

Ms Harris shot back “you respect the American people when you tell them the truth.”

Mr Pence, 61, who heads the government’s coronavirus task force, was under pressure to show he can assume the country’s highest office if Mr Trump, 74, battling COVID-19, becomes too ill to serve.

The stakes were similarly high for Ms Harris, 55, whose running mate, Democratic presidential nominee Joe Biden, 77, would be the oldest US President if elected on November 3.

The debate had a calmer tone than last week’s chaotic debate between Mr Biden and Mr Trump, though Mr Pence repeatedly ignored the moderator’s efforts to cut him off.

The two candidates were also jockeying for position in their respective parties; both are widely seen as future presidential candidates, whatever the outcome of November’s contest.

Mr Trump announced on Friday that he had tested positive and was hospitalised for three nights before returning on Monday to a White House that has struggled to contain the disease. His doctor said on Wednesday that Mr Trump, who continues to receive treatment, had no COVID-19 symptoms for 24 hours.

With the pandemic front and centre at the debate, the two candidates were separated by 3.5m and plexiglass shields on a stage at the University of Utah in Salt Lake City.

Ms Harris had requested the shielding that separated the adversaries.

Pence spokeswoman Katie Miller on Monday mocked Ms Harris, saying if she “wants to use a fortress around herself, have at it”.

Ms Harris spokeswoman Sabrina Singh struck back, saying Mr Pence’s response “tells you everything you need to know about why their COVID response is a failure.”

An aide to the Vice-President on Wednesday said Mr Pence had agreed to the barriers to facilitate the debate.

Both Mr Pence and Ms Harris tested negative for the coronavirus on Tuesday. US government guidelines call for anyone exposed to a person with COVID-19 to quarantine for 14 days regardless of test results.

Mr Biden and Ms Harris made Mr Trump’s handling of the public health crisis a central theme of their campaign, assailing Mr Trump for playing down the health risks and failing to endorse mask-wearing to battle the spread of infection.

Ms Harris ducked the question – as Mr Biden had done earlier – instead noting that Mr Trump has not appointed any black judges to the appeals courts.

“They are going to pack the Supreme Court if they somehow win this election,” Mr Pence said.

That proved ineffectual, and after several instances Ms Page admonished him.

“Vice President Pence, I did not create the rules for tonight,” she said.

“I’m here to enforce them, giving roughly equal time to both of you, which is what I’m trying to do.”

At times, the candidates ignored some of the questions.

Ms Page asked each candidate to talk about possible transfer of power if the president became incapacitated.

Neither candidate answered that, instead reverting to talking points.

Ms Harris focused much of her criticism not on Mr Pence, but on Mr Trump, citing reports that he had called American service members “suckers” and “losers,” and lambasting his relationship toward Vladimir Putin.

Ms Pence meanwhile chose to focus on Ms Harris, calling her too liberal, and accused her of wanting to ban fracking and supporting the Green New Deal.

On Twitter, much of the chatter was about a fly that landed on Mr Pence’s head.

Some joked about the need to test the fly for the coronavirus, as it had skirted the plexiglass partitions separating the candidates and moderator.

Others speculated about whether the fly was an omen of sorts for either party.

In 2016, a fly briefly landed between Democratic nominee Hillary Clinton’s eyes during a town hall-style debate with Mr Trump.

There was also speculation about Mr Pence’s left eye, which appeared to be somewhat bloodshot.