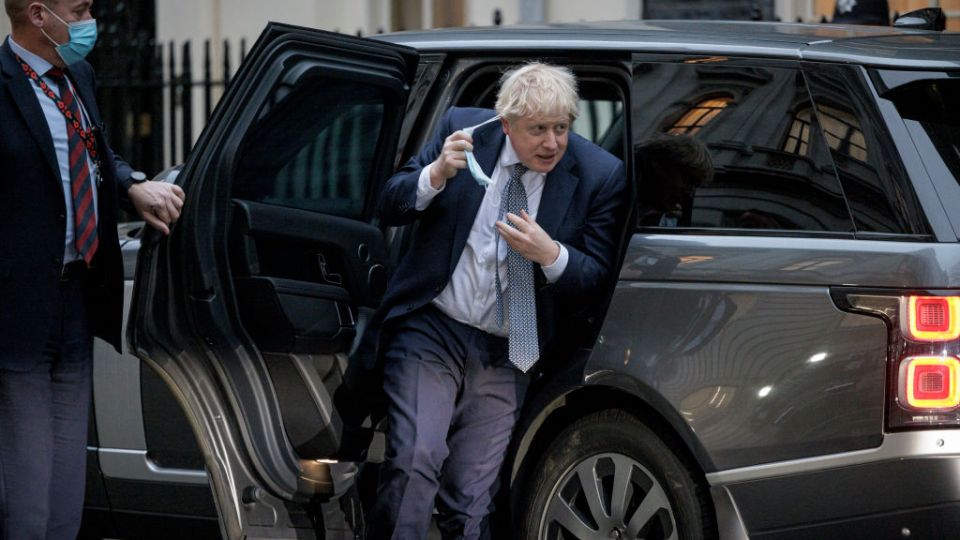 British Prime Minister Boris Johnson's political future is on the line after the "Partygate" scandal.

British PM Boris Johnson’s wait for the findings of an official inquiry into lockdown-busting parties in No.10 and Whitehall continues, with Mr Johnson insisting he isn’t responsible for any delays.

But it has yet to be submitted to No.10, with legal and human resources officials scrutinising it before it can be sent to Downing Street for publication.

The announcement of a Scotland Yard investigation into some of the alleged parties – based in part on the evidence uncovered in the Gray inquiry – has complicated the process, with police and officials wrangling over anything which could prejudice a criminal case.

Mr Johnson travelled to North Wales rather than wait at Downing Street for Ms Gray’s report to arrive.

Asked if he had been involved in delaying it, he said: “Absolutely not, but you’ve got to let the independent inquiries go on.”

He said “of course” it would be published in full. But officials have made clear that is only the intention of No.10, as they are not yet aware what the format will be and whether any sensitive personal or security information would need to be redacted.

“We are in no way seeking to block the report”, Mr Johnson’s official spokesman said, adding “it remains our intention to publish the report as it is received from the investigation”.

The Commons adjourned for the day on Thursday (local time) with no sign of either the report or a statement from Mr Johnson.

He has committed to making a statement to MPs once he has received the report and this remains a possibility on Friday, even though no government business is scheduled in the Chamber.

But Ms Gray’s report, which had been close to finalised, has been held up by the legal checks it is going through, raising the prospect of the process dragging into next week.

Foreign Secretary Liz Truss said on Thursday that she expected the report to be published in full, but could not say when it would be made public.

With the majority of Tory MPs waiting for the report before passing their own judgment on the party leader, Mr Johnson’s allies have rallied around him.

This could leave many Tory MPs, particularly those in the Red Wall of former Labour heartlands won in Mr Johnson’s 2019 landslide, nervous about keeping their seats.

There is no requirement for a new leader to hold a general election, but Ms Dorries said previous handovers, such as Labour’s Tony Blair to Gordon Brown, had taken place in “different times”.

If the outcome of the Gray report is significantly damaging, Mr Johnson could face a revolt from his own MPs, who may choose to call a vote of no confidence.

He is under pressure from some Tory MPs to scrap a planned hike in national insurance to win back support.