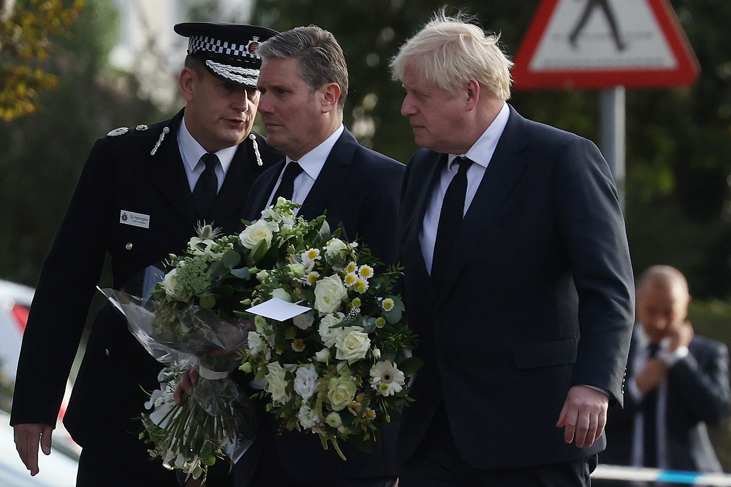 British Prime Minister Boris Johnson has laid flowers outside the church where an MP was stabbed to death as police continued to question the suspect detained under terrorism powers.

The attack on Sir David Amess, from Johnson’s Conservative Party, comes five years after the murder of Jo Cox, an MP from the opposition Labour Party, and has prompted a review of the security of elected politicians.

Amess, 69, was knifed repeatedly in the attack at about midday on Friday in Leigh-on-Sea, east of London, during a meeting with constituents in a church.

Police arrested a 25-year-old British man at the scene on suspicion of murder. Police have said it is believed the man acted alone.

Johnson, interior minister Priti Patel and Labour Party leader Keir Starmer were among those to lay flowers in tribute to Amess at the scene of the murder.

“To the memory of Sir David Amess MP, a fine parliamentarian and a much-loved colleague and friend,” Johnson said in a hand-written note placed in the flowers, adding in a Twitter post that his thoughts were with Amess’ family and friends.

Johnson and Starmer stood side by side in a moment of silence before leaving. Other politicians, police representatives and members of the public came to lay flowers and pay respects.

As tributes poured in for Amess, politicians described the attack as an assault on democracy. Patel said security for MPs was being reviewed and strengthened.

“All measures are being put in place for the security of MPs so that they can carry on with their duties as elected democratic members,” Patel said in a broadcast clip following the visit.

“We live in an open society, a democracy. We cannot be cowed by any individual.”

In Westminster armed police are on patrol. But in their electoral districtsmore often than not there is no security.

Amess was stabbed while holding “a surgery” – a one-to-one meeting with voters, open to whoever turns up.

Conservative MP Tobias Ellwood said that while engagement with the public was a vital part of the job, there was now huge anxiety among MPs, and he called for a pause in such meetings.

Cox, the Labour MP who was killed in November 2016, was shot and stabbed on a street in a northern England town as she arrived at an advice session with local residents. In 2010, Labour MP Stephen Timms survived a stabbing in his constituency office.

Patel said Amess was killed doing a job he loved, and MPs should remain accessible to the public.

“We will continue to absolutely stand by the principles that we are elected by: to serve our constituents in the open way in which we have been doing so, but also recognising that there are safety and protection measures that we have to undertake too,” Patel said.