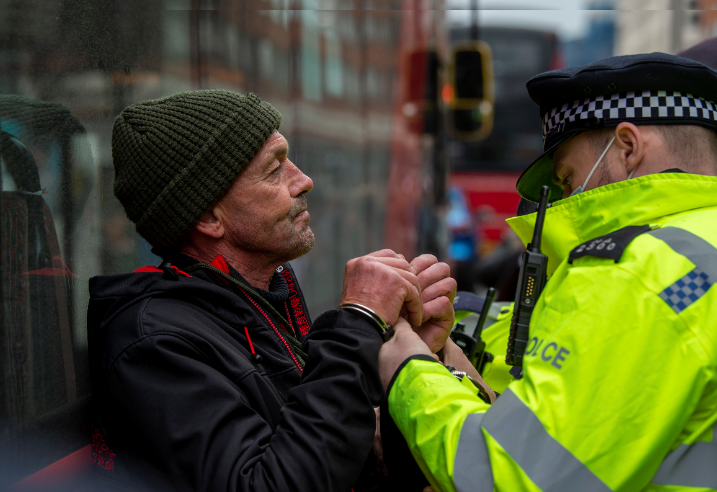 More than 30 arrests have been made after anti-lockdown protesters in central London punched, kicked and pelted police with bottles.

Thousands of people on Saturday joined the demonstration, which travelled from Hyde Park to St Paul’s Cathedral and back to Westminster, ahead of the anniversary of the first lockdown on March 23.

It comes as more than 60 members of parliament and peers signed a letter warning that allowing the police to criminalise people for protesting “is not acceptable and is arguably not lawful”.

The Metropolitan Police walked with protesters on their route along Oxford Street, Chancery Lane, the Embankment and Parliament Square before heading up Whitehall.

Among those attending the march were controversial actor Laurence Fox and Piers Corbyn, brother of the former Labour Party leader.

Crowds that gathered in Trafalgar Square were dispersed, while other demonstrators returned to Hyde Park, where a mob of about 100 people chased police vehicles, punching and kicking them, as they left the area.

Members of the public fled the park, with small children carried by their parents as the wild snenes unfolded.

The Met said 33 people had been arrested by 6.45pm, mostly for breaching COVID regulations. Responding to the protests, Deputy Assistant Commissioner Laurence Taylor said it was “incredibly challenging” to police such events “particularly in the current circumstances”.

‘Not unlawful, but unsafe’

“Of course everyone has a right to protest, protest is not unlawful,” he told the BBC.

“But gatherings of this size are unsafe. It’s incredibly challenging to police events like this particularly in the current circumstances.

“We absolutely recognise the strength of communities, so what we need to do is try and look at what is the best way to keep people safe, the best way to proportionately enforce the law and to that in a way that requires as little intrusion as we can.”

Saturday’s clashes come a week after the Met faced criticism for its handling of a vigil in memory of Sarah Everard.

The parliamentarians’ letter said such “shocking scenes” were “entirely avoidable” if the government had provided guidance to police and ensured protests were clearly exempt from the ban on gatherings under lockdown.

It was addressed to Home Secretary Priti Patel and Health Secretary Matt Hancock, and was coordinated by Liberty and Big Brother Watch.

Half of all adults in the UK have now received at least one dose of a COVID-19 vaccine, becoming the world’s first major economy to hit that milestone.