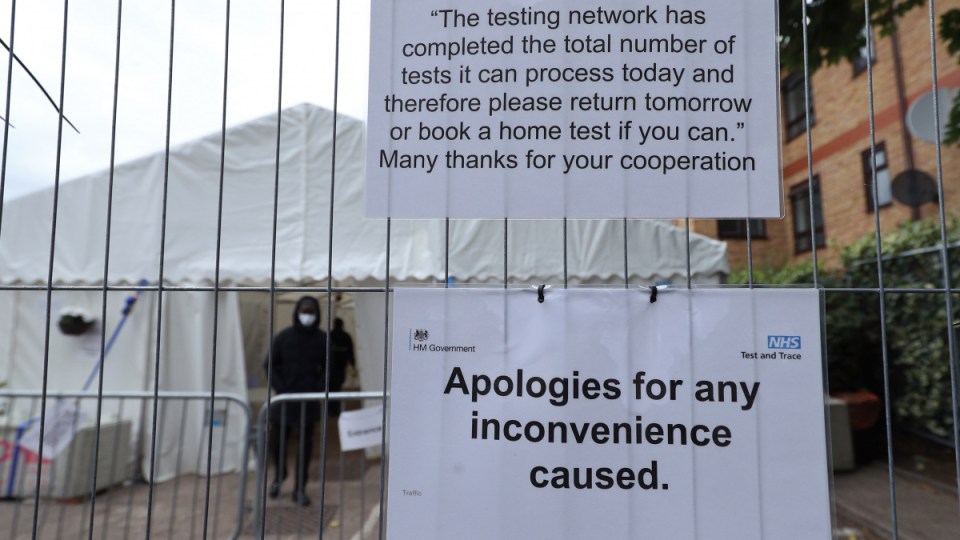 The British virus testing program has been plagued by errors and delays. Photo: Getty

Britain has reported a jump in daily COVID-19 cases to a record 22,961 after authorities said a technical issue left more than 15,000 test results not transferred into computer systems on time.

News of the glitch was likely to cast further doubt over the robustness of the national test-and-trace system Prime Minister Boris Johnson said would be “world-beating” but which has experienced repeated setbacks.

The numbers were published hours behind schedule, just after a statement from Public Health England about the technical problem.

“Today and yesterday’s headline numbers are large due to the backlog of cases flowing through the total reporting process,” PHE said.

The issue, which was identified on Friday and has been resolved, left 15,841 cases not uploaded into reporting dashboards used by the National Health Service contact-tracing system.

“We fully understand the concern this may cause and further robust measures have been put in place,” said PHE interim chief executive, Michael Brodie.

The authority said all the people concerned had been given their results in a timely fashion and those with positive results had been told to self-isolate. But there are concerns the delay might mean that the contacts of those who had tested positive might not be been approached.

In terms of tracing the contacts of the infected people, PHE said the information had been transferred to the relevant systems over the weekend and contact tracers were working urgently to catch up.

“This is shambolic and people across the country will be understandably alarmed,” shadow health secretary Jonathan Ashworth said.

“[Health Secretary] Matt Hancock should come to the House of Commons on Monday to explain what on earth has happened, what impact it has had on our ability to contain this virus and what he plans to do to fix test and trace.”

Earlier, Mr Johnson warned it might be “bumpy through to Christmas” and beyond as Britain deals with coronavirus.

He told the BBC there was “hope” in beating the virus, and called on the public to “act fearlessly but with common sense”.