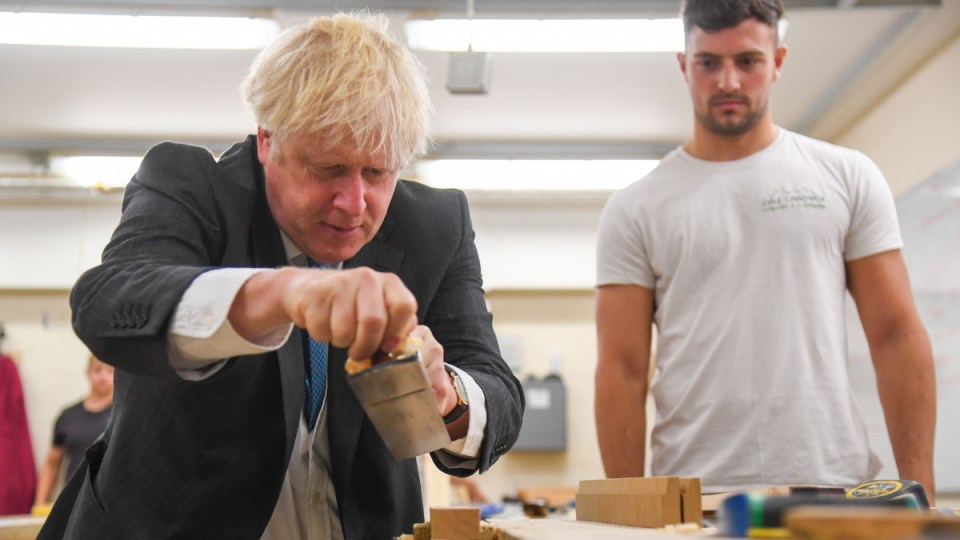 Boris Johnson gets to grips with a planer on a trip to a technical college in Exeter on Tuesday. Photo: Getty

Britain reported 7143 new cases of coronavirus on Tuesday (local time), its highest daily figure yet during the pandemic, and 71 deaths, the biggest toll since July.

The country has reported 450,000 coronavirus infections since March and more than 42,000 fatalities, the highest in Europe.

Britain’s daily number of tests has increased rapidly to almost 200,000 while local measures have been imposed in large areas of northern England and parts of Scotland and Wales.

But Mr Johnson also provided more ammunition for critics on Tuesday when he was asked to clear up confusion about local lockdown rules in north-eastern England. The government announced tighter distancing rules last week after a surge in coronavirus infections across the UK.

The PM was unable to explain how the rules apply to indoor and outdoor settings.

“Outside the areas such as the north-east where extra measures have been brought in, it’s six inside, six outside,” he said, referring to the government’s “rule of six”, which applies in most parts of the country.

“In the north-east and other areas where extra tight measures have been brought in, you should follow the guidance of local authorities, but it’s six in a home or six in hospitality, but as I understand it not six outside.”

But even Mr Johnson conceded his answer was confusing. He said he backed the “common sense of the country” to help help fight the pandemic.

“In the north-east, new rules mean you cannot meet people from different households in social settings indoors, including in pubs, restaurants and your home,” he wrote.

“You should also avoid socialising with other households outside.”

Elsewhere, pressure has intensified on Mr Johnson from MPs in his Conservative party to loosen virus restrictions and allow parliament to vote on the legislation underpinning them.

On the other hand, opposition MPs and many health experts are pressing him to take stronger action to curb the renewed spread of the virus.

Parliament is scheduled to debate the government’s coronavirus legislation on Wednesday.