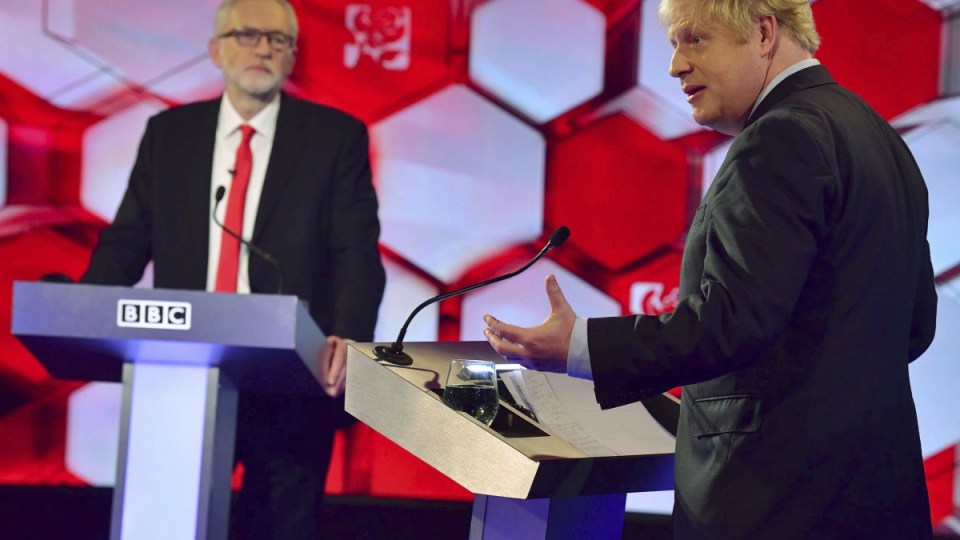 Boris Johnson successfully ducked and weaved his way through his final televised debate with Jeremy Corbyn, leaving him heavily favoured by pollsters to be re-elected on Thursday as Britain’s Prime Minister.

The most unpopular and unconvincing leader in the modern history of the Labour Party, 70-year-old Corbyn needed to make an impact but has never been dexterous enough to trip up someone as slippery as Johnson, who has a gift for laughing off tough questions or dodging them altogether.

Challenged in the BBC debate about Conservative police cuts and nursing shortages and his own record of dishonest or racially offensive comments, Johnson smiled cheekily and repeated his slogan that it is time to “Get Brexit Done”, a mantra he trotted out no fewer than 13 times.

Neither Corbyn nor the BBC moderator Nick Robinson showed the skill to pin him down, even when his answers were comically dishonest.

The PM was asked, for instance, about the story that had dominated news bulletins for several hours before the debate – the fact that the UK’s deputy ambassador in Washington had quit saying she could no longer stomach “peddling half truths” about Britain’s planned departure from the European Union “on behalf of a government I do not trust”.

In terms of the topics covered at the #BBCdebate, viewers thought Boris Johnson did better on Brexit (62%) security (55%) and government spending (48%), while Jeremy Corbyn did better on the NHS (55%)https://t.co/Br3goxInv9 pic.twitter.com/ScJuqvXdPW

“I don’t know who you are referring to but what it shows me is we do have to move on (from Brexit) in this country,” Johnson said, somehow maintaining an almost straight face.

With polls suggesting the Conservatives are near certain to emerge as the single largest party, Britain’s most prominent pollster, Sir John Curtice, concluded after the debate that there is a “two-thirds to 70 per cent” chance that Johnson will win a clear majority and avoid the sort of hung parliament that might frustrate his plans for taking the UK out of the European Union.

Having called a snap election with the public deeply polarised over Europe, Johnson’s strategy has been to unite Brexit supporters behind his own party by “out-Brexiting” the smaller Brexit Party of long-time anti-EU campaigner Nigel Farage and hoping that the pro-EU vote remains split between Labour, the Liberal Democrats and smaller parties.

To achieve that, the PM’s Australian-born campaign manager Isaac Levido has insisted on keeping the focus on Brexit rather than Labour’s pet topics of the struggling health system and the past decade of spending cuts, and avoiding serious media scrutiny of Johnson.

Despite building his career on a reputation for being a top campaigner Johnson refused to take part in a leaders’ debate about climate change, sent a proxy to argue with other leaders in some TV appearances, banned the left-leaning Daily Mirror from his campaign bus and dodged a lengthy interview with the ITV network.

Out went the daily press conferences of past campaigns and most striking of all, Johnson became the first party leader to refuse to do the in-depth BBC leader interviews that have long been a feature of British elections.

Labour believed that all leaders would undergo 30-minute grillings with the BBC’s meticulous interviewer Andrew Neil, so it sent Corbyn along. He fared poorly, tetchily refusing to apologise for anti-Semitism in his Party.

In the 2017 election the newly appointed Corbyn exceeded most expectations but by now he has lost whatever novelty and lustre he once enjoyed, while stubbornly refusing to reach out beyond the Labour base.

The minor party leaders also lined up for their gruelling appointments with Neil but Johnson kept claiming with a knowing smirk that his campaign managers would decide whether they could fit it into his schedule, eventually declaring that he could not find time “to do interviews with everybody”.

The PM did manage to do dozens of lighter TV appearances and friendly interviews with the overwhelmingly right-wing print media, including love-ins with his former employers the Telegraph and the Spectator.

Neil complained on air that he had wanted to question the PM about the suggestion of untrustworthiness that has followed him throughout his career.

“There is no law, no Supreme Court ruling that can force Mr Johnson to participate in a BBC leaders’ interview, but the Prime Minister of our nation will at times have to stand up to President Trump, President Putin, President Xi of China, so it was surely not expecting too much that he spend half an hour standing up to me,” Neil said.

Neil would certainly have tested Johnson’s promise to quickly “Get Brexit Done”, a slogan designed to tap into the public’s weariness with the chaotic uncertainty that has dogged Britain since a July 2016 referendum opted to leave the EU with no clear strategy for doing so.

A Johnson government would leave the EU by January 31, the PM vows, so the country could move on to the many issues that have been ignored in recent years.

The truth is that Brexit will be far from “done”. Talks on a new trade deal and the future relationship with the 27-country bloc that is the UK’s nearest neighbour and main trading partner have not even begun.

There is enormous scepticism, to put it mildly, that the process can be completed during a 12-month transition period, as Johnson promises. If that deadline is missed, Johnson says the UK he will leave anyway, plunging the country into a harsh break with the EU.

Britain will also face a renewed push for independence in Scotland, where 62 per cent of voters were against Brexit in 2016. The Scottish National Party is set to win most of the 59 Scottish seats in the 650-seat House of Commons, and will take such a victory as a mandate to hold a new referendum on leaving Britain in the hope of rejoining the EU.

Johnson says he will not authorise a repeat of the 2014 Scottish independence referendum, which rejected independence by 55.3 per cent to 44.7 per cent. But if the Scottish government holds its own breakaway vote things could get ugly.

Welsh nationalists have vowed during the election campaign to push for their own independence if Brexit goes ahead, although they concede they are not as close as the SNP to winning majority public support.

A more immediate problem will be Northern Ireland, which has the UK’s only land border with the EU. It registered a 55.8 per cent vote against Brexit in 2016 and harbours fierce opposition in both its Catholic and Protestant communities to erecting new post-Brexit barriers to the Republic of Ireland.

The “Good Friday” peace agreement of 1998 commits the UK government to holding a referendum on uniting Northern Ireland and the Republic whenever there appears to be public support for unity, with further referenda allowed each seven years after that.

Anyone who believes that “Getting Brexit Done” means a return to normalcy for the UK is in for an unpleasant surprise after next Thursday.