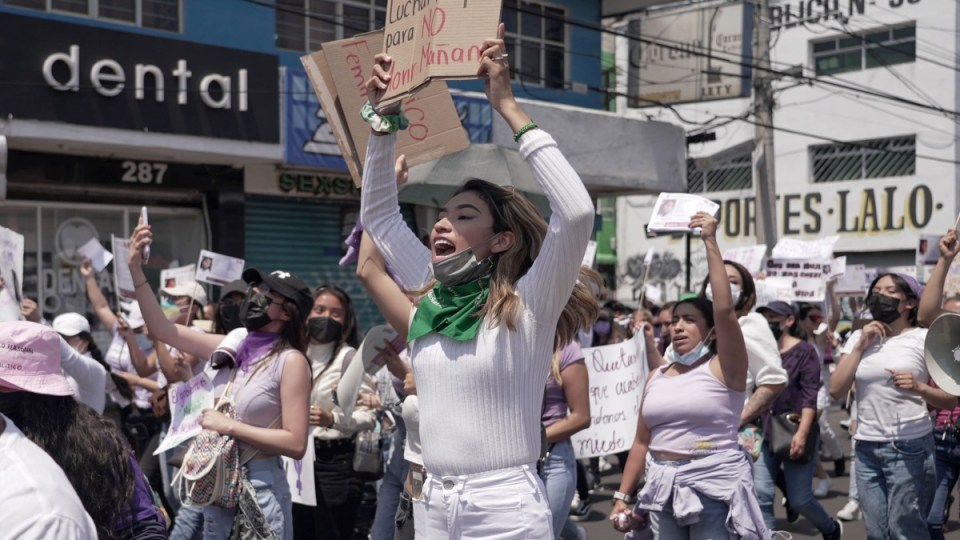 The protests in Mexico were triggered by the murder of 18-year-old Debanhi Escobar Photo: AAP

Hundreds of women have marched through downtown Mexico City and its suburbs to protest the horrifying death of an 18-year-old in the northern city of Monterrey.

Protesters on Sunday also marched in the rough suburb of Nezahualcoyotl, where two women were killed in the last week. The demonstrators, mainly women, carried signs reading “No to Harassment” and “Mexico is a mass grave”.

In Mexico City, the march was largely peaceful. The demonstrators taped small missing posters on independence monument the Angel, each one describing the disappearance of a woman.

Many of the posters depicted Debanhi Escobar, whose body was found on Thursday in a cistern at a motel in Monterrey, almost two weeks after she had gone missing.

Marchers chanted “Justice, justice!” and carried a banner reading “24,000 are missing” about disappeared women. Overall in Mexico, the number of missing people of all genders has risen to more than 100,000.

Activists say police and prosecutors have been slow and ineffective in investigating the cases.

Those criticisms were reinforced when the father of Debanhi Escobar said authorities had searched the motel several times. But it was not until workers reported a foul odour coming from an underground water tank that investigators finally found her body.

She had died from a blow to the head, apparently soon after she was last seen April 8.

Her case shocked Mexico because the young woman was left on the side of a highway late at night, purportedly after a taxi driver tried to fondle her.

The case made headlines because of a haunting photo taken by the driver, who was supposed to get her home that night.

The driver, who worked for a taxi app, took the photo to show the 18-year-old got out of his car alive on the outskirts of Monterrey.

Nobody saw her again until late on Thursday, when investigators managed to pull her body from the water tank near a pool at the roadside motel.

Killings of women have increased in recent years in Mexico, rising from 977 in 2020 to 1015 in 2021. Those were just cases classified as “feminicides” a legal term used in Mexico when women are killed because of their gender. Killings of women overall are much higher.

Disappearances of women remain high, with about 1600 reported missing this year.