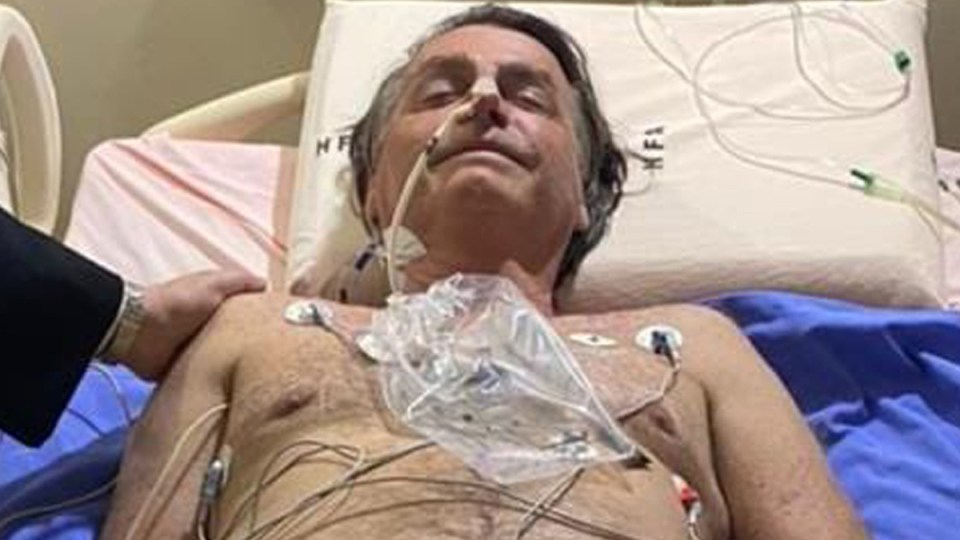 Mr Bolsonaro posted this photo of himself in in hospital.

After 10 straight days of hiccups, Brazilian President Jair Bolsonaro has been admitted to a hospital with what doctors say is an intestinal obstruction that could require emergency surgery.

Mr Bolsonaro, 66, was admitted to the Armed Forces Hospital in the capital of Brasilia early on Wednesday (local time) and was “feeling well”, according to an initial statement that said doctors were examining his persistent hiccups.

But hours later, the president’s office said the surgeon who operated on Mr Bolsonaro after he was stabbed in the abdomen during the 2018 presidential campaign decided to transfer him to Sao Paulo, where he will have further tests to evaluate the need for an emergency surgery.

Mr Bolsonaro, who is both Catholic and evangelical, posted on his official Twitter account a photo of himself lying on a hospital bed, eyes closed, several monitoring sensors stuck to his bare torso.

At the edge of the photo, a hand reaches out from an unseen person wearing what appears to be a black religious robe and a long chain with a gold cross.

The 2018 stabbing caused intestinal damage and serious internal bleeding and the president has gone through several surgeries since, some unrelated to the attack.

In recent weeks, Mr Bolsonaro has appeared to struggle with speaking on various occasions and said that he suffers from recurring hiccups.

“I apologise to everyone who is listening to me, because I’ve been hiccupping for five days now,” he said in an interview with Radio Guaiba on July 7.

He suggested that some medications prescribed after dental surgery might be the cause.

The following day, during his weekly Facebook Live session, Mr Bolsonaro apologised again for not being able to express himself well due to the weeklong hiccups.

Chronic hiccups are usually the manifestation of an underlying problem, such as an obstructed intestine, that might require surgery, said Dr Anthony Lembo, a gastroenterologist at Beth Israel Deaconess Medical Centre in Boston. In some cases, part of the intestine might need to be removed, he said.

“Any time you’re moving bowels it’s not a small surgery,” Dr Lembo said, adding that in the case of repeated surgeries, as in Mr Bolsonaro’s case, interventions get more complicated.

Mr Bolsonaro has been under growing pressure from a congressional inquiry into his administration’s handling of the coronavirus pandemic and alleged corruption in the acquisition of COVID-19 vaccines.

Recent polls have shown record-low approval ratings and indications that he could possibly lose the 2022 election.

The Ferguson Report: Dutton to see here, just the Leader of the Opposition. Move along
At least 34 dead in Bolivia bus crash
Today's Stories