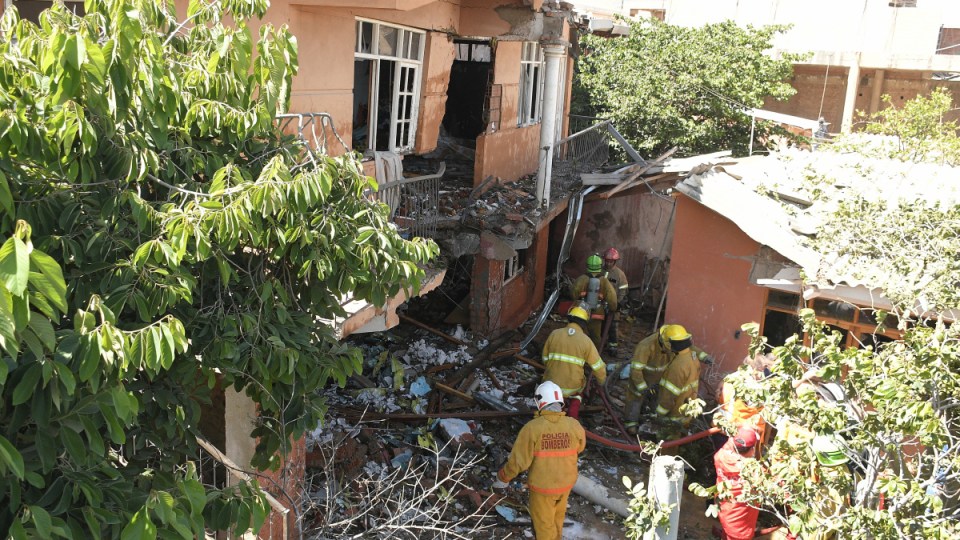 Firefighters inspect the damaged house where the plane crashed and the woman died. Photo: AAP

A woman has been killed and her brother injured when an air force jet crashed into their home in Sacaba, a city of about 150,000 in Bolivia’s central province of Cochabamba.

There were no other casualties, authorities said.

Witnesses said they saw two people eject from the aircraft before the plane exploded and crashed into the two-storey house on Wednesday (local time).

Authorities praised neighbours for rushing to the scene with buckets of water to douse the flames. The civilian first-responders also turned off the gas and electricity to deny fuel to the fire.

The air force identified the plane as a K-8, a two-seat intermediate jet trainer and light combat aircraft designed and produced jointly by China and Pakistan.

Bolivian purchased six K-8s a decade ago, intending to use them for drug interdiction.

Regional police commander Colonel Jhonny Corrales said one of the pilots was under medical observation at a hospital in Cochabamba city, while the other was being debriefed about the accident.

“The pilots are being attended to,” Air Force Colonel Juan Ballester said at the scene.

The pilots encountered mechanical problems while on a training flight, according to Colonel Corrales, who said the surviving occupant of the house was admitted to a hospital in Cochabamba.

Air force investigators remained at the crash site, along with firefighters and members of several law enforcement agencies.

Two air force pilots died a year ago in a crash during a training flight in Cochabamba province.